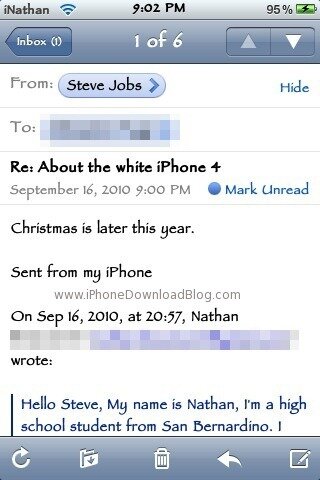 The details appeared when one of the iDB reader sent email to Steve Jobs to ask that if he could get iPhone 4 White by xmas. And then, reports got that Steve replied to him for the arrival of iPhone 4 White before Christmas hoping it by year end.

Initially, White iPhone 4 was believed to release with black iPhone 4 that already delayed many times and in July’s press conference, Apple has declared that it will be coming in the end of this year.

“I want the white one but Apple said it won’t be available until later this year. I know you must be asked this question hundreds of times a day but do you think we can expect to get the white iphone for Xmas? I hope you can answer. Thank you Steve.”

And then the Steve Job’s reply said, “Christmas is later this year”.

This mail is not hundred percent sure, however formerly Apple has assured that the new iphone 4 will be available at the end of the year. All Apple fans are eagerly waiting just for any official announcement.

According to reports from Engadget, Apple has once again failed to give a solid explanation on why their white device just can not appear to make it to market, but as they have told in the past, it is very likely that it is due to the company having problems manufacturing the white color with their partners over in China.