Walmart will jump head-on into the cellphone business with its own, branded wireless plan, announced by Walmart on Monday. Walmart Family Mobile postpaid plans detail is given below.

Walmart Family Mobile, the new postpaid plan will be available starting next week without a contract. It is a really good deal.

Walmart is ranked as no one company among retailers according top the list according to Fortune Magazine’s 2009 Most Admired Companies. It is a veteran in the cellphone market with its two prepaid plans: Common Cents, which operates on the Sprint network, and Straight Talk, which operates on the Verizon network. Walmart Family Mobile will operate with the T-Mobile USA network to launch a new brand of post paid phone service that offers best value for unlimited talk and text.

Without any contracts or hidden commitments, Walmart Family Mobile Service will be offered as a monthly post paid plan and sold exclusively n nearly 2,500 stores from Sept. 20. In this plan, considerable savings to a family of three that amounts to almost $1,200 per year in comparison to other leading national unlimited plans will be offered.

With a no compromise n the quality and keeping the best interest of families in the mind, Walmart Family Mobile is designed to offer the most affordable choice of post paid plan. the primary line of service will be charged at $45 per month with each additional line costing additional $25 per month as per the plan terms. A range of high tech phones from Samsung, Motorola (News – Alert) and Nokia, including Android phones, QWERTY keyboard, touch screens and more is also offered by Walmart. This unique service plan will not charge annual contracts and surprise overages and comes with easy upgrade anytime with new handsets at no extra fee or commitment.

The vice president of merchandising, Walmart U.S, Greg Hall quoted as per a release, “Walmart Family Mobile makes it more affordable to build meaningful relationships with family and friends so that even when budgets are limited, time spent communicating with loved ones isn’t. This plan provides families with the flexibility to connect with each other without surprise charges and with the added benefit of one of the most trusted wireless network providers.”

“There’s a “perception among customers that prepaid service doesn’t offer access to the best phones or the best network quality,” and the “postpaid” plan is the best way to avoid this stigma. Basically, it looks like the best of both worlds — no early termination fees or credit checks, and no running out of minutes because you forgot to top off.”

Jim Alling, T-Mobile’s chief operations officer, USA said “T-Mobile is pleased to offer Walmart with the necessary robust nationwide network so as to launch the new innovative service. The new service plan will prove to offer the best low-cost option for unlimited voice, messaging, web and also international calling as low as 5 cents per minute. Besides all, Walmart Family Mobile also offers affordable Data plans with each activated account preloaded with 100MB WebPak for every service line. Among family members with WebPak refill cards, the data plan can be shared and easily available online or in stores.”

The service is being launched today on September 20th and will offer several phones, which include: 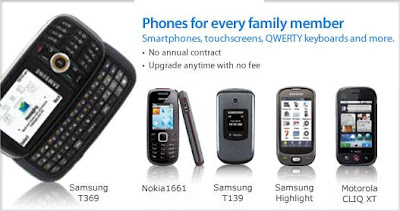