Razer, the manufacturer of the best Gaming Hardware, had unveiled the gaming tablet concept which was codenamed as Razer Project Fiona earlier this year at CES. Since then, there were no details regarding this device. But soon after the device received a 10,000 likes on Facebook, the CEO of Razer, Min-Liang Tan posted the specifications of the device. The Razer Project Fiona tablet is expected to get twice the thickness and weight of the iPad. It will weigh about 2.88 pounds and measure thickness of about 0.74-inches. It is anticipated that the device will be offered at an approximate price tag of $1300. 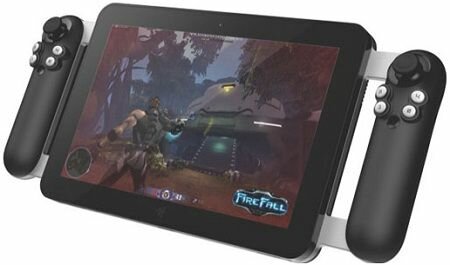 The gaming tablet will sport a display of 10.1-inch screen with a resolution of 1280×800 pixels. It will run on Windows 8 operating system. Razer Project Fiona is powered by an Intel Quad Core i7 Ivy Bridge processor. The device will feature two prongs on both the sides which will act as the controllers. Each prong will have an analogue stick, shoulder buttons, a trigger and four buttons. The device uses Hybrid user interface for PC gaming. Connectivity features of Project Fiona will include Wi-Fi 802.11b/g/n and Bluetooth 3.0. In addition to these features, it will also sport magnetometer, accelerometer, 3-axis gyro and Dolby 7.1 Surround Sound (THX certified).