Apple gives the solution of iphone 4 Antena Problem. And yesterday announcements had been made that they will be giving away free cases to all customers with an iPhone 4 or customers who want to return the iPhone can get a full refund, due to the antenna issues. 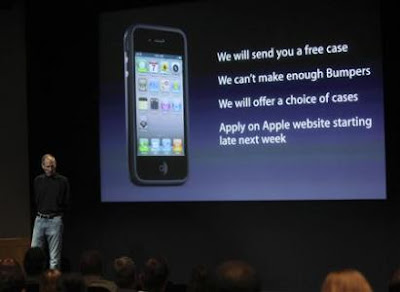 Apple said, “They will give a free case to all customers who purchased the iPhone 4 before September 30, 2010, or will issue a refund if customers already purchased a bumper. The cases will vary from Apple’s own bumper cases to others sourced from third party manufacturers, because Apple are unable to make enough bumpers in this quarter. Sadly, Apple will not be issuing a hardware fix for customers, but instead remedy the situation with a free case during their press conference.”

Users will need to register through the Apple website with their address and information to receive their free case. The website is expected to go live at the end of next week.

Anyone who is still unhappy about this may return their undamaged iPhone 4 to any Apple Store within 30 days of purchase for a full refund. So there is the answer everyone has been waiting 22 days for, a free case for their phone. People who already purchased the $29 “Bumper” cases will be refunded.

Jobs had begun the event by saying, “We’re not perfect but was quick to point out that no cell phone is perfect. He played a video showing competing smart phones, including a BlackBerry from Research in Motion Ltd., losing signal strength when held in certain ways.”

Phones usually have an antenna inside the body. In designing the iPhone 4, Apple took a gamble on a new design, using parts of the phone’s outer casing as the antenna. That saved space inside the tightly packed body of the phone, but means that covering a spot on the lower left edge of the case blocks wireless signal. 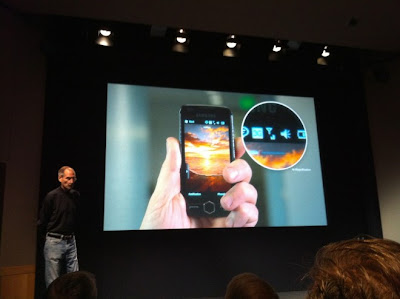 On Friday, in the company’s first remarks following the magazine’s report, Jobs said Apple was “stunned and upset and embarrassed.”

Jobs said, “The iPhone 4′s antenna issue isn’t widespread. Its just over five out of every thousand users have complained to Apple’s warranty service, and less than 2 percent have returned the device.”

Jobs said, “We’re not feeling right now that we have a giant problem we need to fix. This has been blown so out of proportion that it’s incredible. I know its fun to have a story, but it’s less fun when you’re on the other end of it.”

Analysts have criticized Apple’s first responses to reports of reception problems as dismissive, and cautioned that the company shouldn’t come across as arrogant.

Earlier, Apple said, “The problem with the phone was primarily a software issue, with iPhones displaying more cell phone signal “bars” than they should have been – leaving people who believed they had a strong signal frustrated by dropped calls. Apple issued a software update Thursday it said would make the number of bars shown on the phone’s face more accurate.”

But Consumer Reports painted the problem as much broader. On Friday, the report said the free cases were “a good first step toward Apple identifying and finding a solution for the signal-loss problem of the iPhone 4.”

Jobs apologized to buyers who had less-than-perfect experiences with the new device.

The refund applies even for those who have long-term contracts with AT&T Inc., the iPhone’s exclusive U.S. wireless carrier.

Jill Small, an iPhone 4 owner who runs a fashion consignment business in Los Angeles, said she was of two minds about the antenna issue. On the one hand, she hadn’t noticed any problems with the phone. On the other hand, if there really is a problem, she finds Apple’s response inadequate.

Ed Brown, who sells accessories for Apple products from a table set up on the street outside an Apple store in New York, said he’s had people come hunting for cases for the iPhone 4 because they’ve heard of the antenna problem. But they’re not mad at Apple.

Jobs, a cancer survivor, also addressed a question about his health Friday.

“I’m doing fine. I was even better earlier in the week (when) I was having a vacation in Hawaii, but I decided this was important enough to come back for,” he said. “I’m doing great.”