Sharp states its newest LCD tech is compatible to 3D because it can produce the brighter images desired to counteract the dimming effect of 3D glasses up to 1.8 times brighter than a “standard LCD,” through the company’s own numbers as well producing more precise color to set aside yellow pixel. Sharp is asserting that its 4th color (yellow) Quattron technology offers brighter images that overcome the dimming.

The Quattron TVs will execute both 2D to 3D conversion similar to Toshiba’s Cell TV, and 3D to 2D conversion. It has double click power button on Sharp’s LCD button to put them in 2D mode. Thus, now grandma can watch Despicable Me with the whole family without Dramamine.

Sharp Corporation did not demonstrate its 2D-to-3D conversion, they declares it will be available with 16 levels of intensity to allow each user to select which looks most realistic, and change any content including streaming movies from Netflix and downloaded movies playing off USB thumb drives. 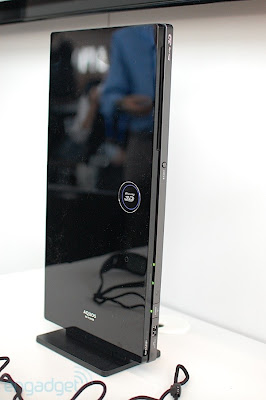 The Blu-ray players have been reduced incredibly thin dimensions, and included some features like slot-loading for discs and holes on the back to allow wall mounting. It’s features also includes full 3D 1080p/ 24fps Video output, Blu-ray content, access to wide variety of content, DNLA connectivity. The Blu-ray player BD – HP90U will be available at cost of $499.99 and BD – HP80U at $429.99. Both models will support outside streaming content including YouTube, Netflix and Vudu. The Ethernet port or optional WiFi adapter can also be applied for Netflix, VUDU or a variety of other over the top video services. 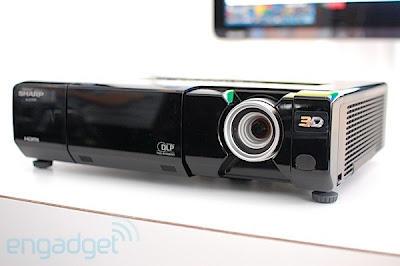 Sharp has also declared 3D-ready DLP projector for the home theater crowd with Quattron 3D TVs, Blu-ray players. Sharp 3D-ready DLP projector is named as XV-Z17000. A single-chip DLP design will be used for producing contrast ratios up to 30,000:1 and brightness up to 1,600 ANSI lumens. Other features include 2HDMI, S-Video, RCA, consumer electronic control functionality, RS-121C port for universal control, and energy saving features. Similar to latest 3D TVs, the projectors will also presented with two pairs of 3D glasses. Sharp will launch the projector in the first quarter of 2011and announce its price at CES.