You are here: Home / Technology / Scientists recorded the Songs Made by the Sun

Scientists recorded the Songs Made by the Sun

Many Scientists have found the big giant fireball in the sky with some interesting tunes. A team of astronomers at the University of Sheffield have recorded the “music” which is produced by the magnetic field in the outer atmosphere of the sun.

Scientists also discovered that the enormous magnetic loops encircling outer layer of the atmosphere far from the Sun which is known as Coronal Loops, vibrating like strings on a musical instrument or behave like sound waves traveling through a wind instrument. With the help of satellite images of these loops, which can be over 60,000 miles long, researchers can record its shaking frequency using the sunglow ring’s satellite image to transform it into voice and then hasten it into frequency that human beings can hear, thus a song of sun is completed. 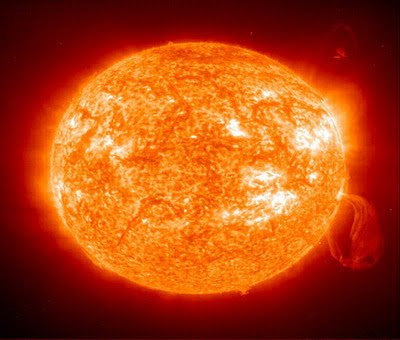 In this sense, the solar atmosphere is constantly pervaded by the music of the coronal loops. The coronal music also provides scientists with a unique and unprecedented tool to study the magnetic solar atmosphere, as the motion of these loops is determined by their local surroundings. This technique is known as solar magneto-seismology and is very similar to the seismology methods used by geologists studying earthquakes.

According to Professor Robertus von Fáy-Siebenbürgen, head of the solar physics research group at Sheffield University, said, ‘It was strangely beautiful and exciting to hear these noises for the first time from such a large and powerful source. It is a sort of music as it has harmonics. It is providing us with a new way of learning about the sun and giving us a new insight into the physics that goes on at in the sun’s outer layers where temperatures reach millions of degrees.’

The Sun’s acoustical waves bounce from one side to the other of the Sun in about two hours, causing the Sun’s surface to oscillate, or wiggle up and down. Because these sound waves travel underneath the Sun’s surface, they are influenced by conditions inside the Sun. So scientists can use the oscillations to learn more about how the structure of the Sun’s interior shapes its surface. Researchers are hoping that by studying the “music of the sun” they might predict solar flairs to minimize the effects of these phenomenons.

When the sun’s activity, and thus solar flare production, increases, the resulting “space storm” can have catastrophic results here on earth, destroying electronic equipment, overheating power grids and damaging satellites. NASA warned last week that the sun’s activity is starting to increase following an extended period of low activity and is on course to throw out unprecedented levels of magnetic energy into the solar system by 2013.

Studying this magnetic solar atmosphere will help the team, which is headed-up by Professor Robertus von Fáy-Siebenbürgen and includes postgraduate student Richard Morton and postdoctoral research associate Dr Youra Taroyan, all from the Dept of Applied Mathematics, make further breakthroughs into understanding one of the key and central unresolved problems of modern astrophysics, i.e. the heating of solar and teller coronal plasmas, and reveal the underlying physical processes: Are there millions of localized magnetic explosions releasing the energy necessary to maintain the corona at millions of degrees or is the physics related to the numerous waves propagating from the internal regions of the Sun toward its outer regions, reaching even space around the Earth’s atmosphere.

“The Sun is playing a secret melody, hidden inside it, that produces a widespread throbbing motion of its surface. The sounds are coursing through the Sun’s interior, causing the entire globe, or parts of it, to move in and out, slowly and rhythmically like the regular rise and fall of tides in a bay or of a beating heart.” (Kenneth R. Lang)