Samsung launches its most affordable full touch mobile phone in india, the new Samsung Star Nano 3G S3370 in India. In the wake of upcoming 3G services even Samsung has joined the race to offer affordable touch screen phones that supports 3G connectivity. Samsung aims to offers its customers high speed browsing, high quality video streaming, faster downloads and great internet connectivity together with a device that is affordable and full of features justifying the price tag. Price of Samsung Star Nano 3G is Rs.7320/- in India. 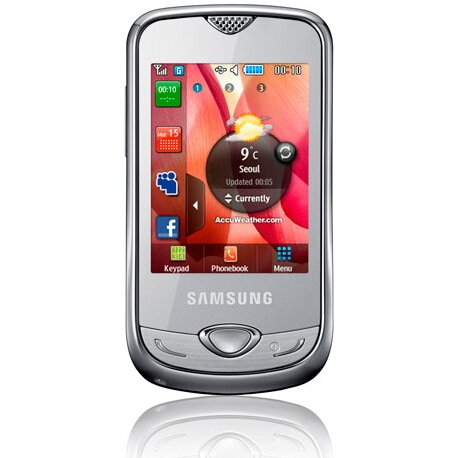 The company offers the Star Nano S3370 in a compact device designed with 3G touch screen features in a beautiful curvilinear look. The phone is a complete package with 2.6 inch screen with Touchwiz 2.0 plus. It supports 1.3 MP camera with video recording and full screen video playback. The phone also comes with Pop Up SNS together with mail, profile and photo tool bars to enable its users to frequently update their status and stay connected. The SNS 2.0 allows easy access to Facebook, YouTube and MySpace. The social networking freaks also get instant chat messenger facilities like, Palringo Chat, GTalk and AIM. The new Samsung Star Nano 3G comes with a 4 page menu.

While speaking about the prospects of 3G enabled mobile devices in India, in the light of current 3G availability in the country, Ranjit Yadav, Director, Mobile &IT, Samsung India Electronics Pvt. Ltd., said, “The launch of Star Nano 3G is significant as it represents our most affordable 3G touch screen handset as well as strengthens our portfolio of 3G enabled handsets as the country gears up for the roll-out of 3G services very soon.” It is interesting to note that with the launch of Star Nano 3G Samsung increases its count of 3G enabled handsets in the country to 21.