Yesterday (25th October, 2010), the Waterloo-based mobile tech giant RIM (Research In Motion) has introduced the first Simulator & SDK (Software Developer Kit) for its upcoming BlackBerry Playbook tablet. The first SDK and Simulator tools are necessary for developers of Mac and windows. The kit allows both developers to create, run and test their applications in the RIM-preferred Adobe AIR format and provides disk image that can run in VMware and maybe other virtual machines.

According to the, David Yach, Chief technology officer (CTO) of Rim, “The new SDK for the BlackBerry PlayBook unleashes a wealth of opportunity for the Adobe and BlackBerry development communities to easily create value-added applications and experiences for customers and we are extremely excited by the positive feedback received from developers in early trials.” 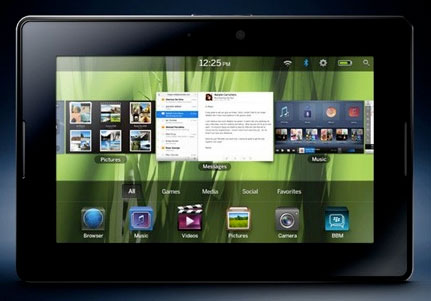 The Blackberry playbook is equipped with a dual-core processor and multi-processing OS. It is the world’s first tablet to create from the metal up to run Flash Player 10.1 and Adobe AIR applications in a fully integrated, fully optimized fashion. This incorporated support and the BlackBerry PlayBook’s outstanding processing power provide developers the ability to send very rich content and applications with highly-responsive and fluid touch screen experiences.

Plugging the Simulator in to the playbook tablet, the developers can test applications for use on the device just like how they would appear on the actual device. It provides some best ideas of the user interface of the new QNX operating system. The simulator boasts a very small part of the actual features, really only showing off the media player and the general user interface like the on-screen keyboard.