PS3 Update 3.50, a new firmware update, for the Sony PlayStation 3 has been released by Sony on 21 September 2010. The console is brought to firmware version v3.50 and Blu-ray 3D Disc Playback functionality is added by this system software update. It is expected that it rolls out smoothly and does not cause too many problems. 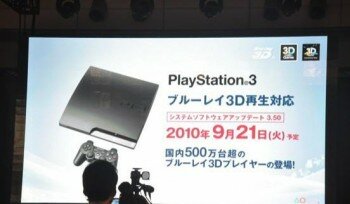 This update contains Facebook integration by which developers will be allowed create PS3 games that can interact with users Facebook profile. PS3 users can select compatible PS3 titles to access public information on Facebook including user name, profile, uploaded photos and friends list to enhance their gameplay experience when they (compatible PS3 titles) are available.

It is expected that the whole Facebook experience should be a lot better on the whole. Along with the 3D Blu-ray 3D disc playback, another new feature is the new Grief Reporting Function by which users are allowed to report any unsuitable messages that they receive from other PSN users, and this is accessible from the options menu in the messages list in the FRIENDS category. Main attraction of it is the ability to watch 3D films via the PS3. If users want 3D Blu-ray movie support then they will be able to download PS3 firmware update 3.50 after owning a PS3.