Nokia X5-01 fills the gap between the Nokia X3 and Nokia X6 mobile phones. And Nokia X6 8GB is a baby brother to the original Nokia X6 device which comes with 32GB storage.

The Nokia X5 features excellent sound quality, dedicated music keys and it Comes with Music Ovi Music. The phone has a full QWERTY keyboard under the dashboard and supports social networks like Facebook, Twitter, MySpace and Hi5 as well as major IM and webmail services. 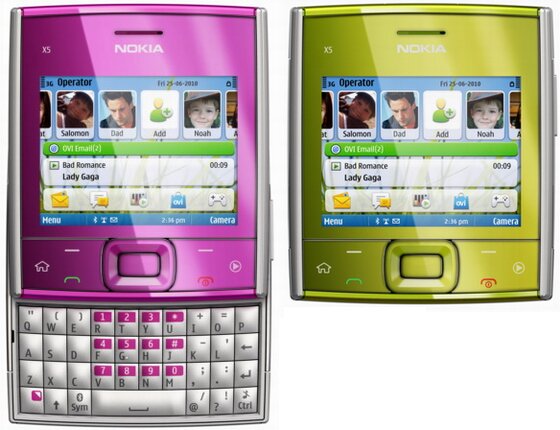 Nokia X5 comes with 5 MP camera with 4X digital zoom and LED flash. With 200 MB internal memory, phone has expandable memory slot which supports up to 32 GB memory.2 GB card included in device from Nokia. According to company, phone has powerful battery with up to 16-days standby time or 24 hours music playback from a full charge.

Nokia introduced some new features in this device, spin the phone to switch to a new random track; while shaking it reveals the number of unread messages! The phone will be available in Indonesia during Q3, at an estimated retail price of EUR 165 before taxes and subsidies.

Nokia X6 8GB is expected to launch during Q3 2010, and will sell at an estimated price of EUR 225 before taxes and subsidies.