The creators of the popular Blackberry phone, Research In Motion (RIM) unveiled the new BlackBerry PlayBook tablet which is said to be the first serious competitor for the iPad and tons of other Android based tablets. The PlayBook has a seven-inch, multi-touch display and designed as a high-powered browsing device with both a WebKit browser as well as Flash 10.1 and AIR support. 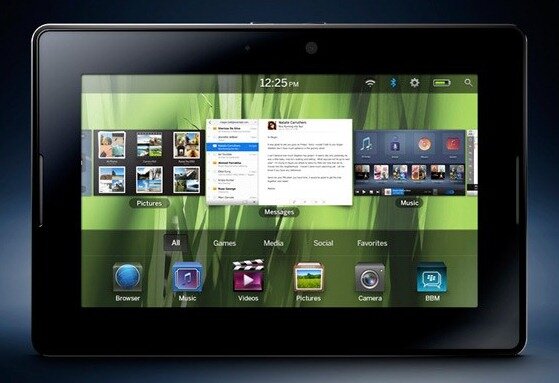 Blackberry PlayBook can play most of the newer video formats and also has a microUSB connection which will let you to connect external devices or hard drives. Also, it has a HDMI video output so that you can connect it to your HDTV to watch movies on it. It also supports Wi-Fi (802.11 a/b/g/n) and Bluetooth 2.1.

PlayBook is built on the QNX Neutrino microkernel architecture and weights only 0.9lbs (400g) that makes it easier to carry around, unlike the Apple iPad which is bulky. The Blackberry Playbook improves browsing experience with an Adobe Flash 10.1, Adobe Mobile AIR, WebKit/HTML5 compliant browser, Adobe Reader, POSIX, OpenGL, and Java.

Blackberry will have a 7″ Multi-touch capacitive screen LCD display with screen resolution of 1024×600 pixels and is just 9.7mm thick.  With support for symmetric multiprocessing, the Blackberry Playbook will run on the Blackberry Tablet OS. Also, it has Dual HD Cameras: 3 MP front facing and 5MP rear facing. It runs on a 1 GHz dual-core processor and packs in 1GB RAM.

Key features and specifications of the BlackBerry PlayBook:

The BlackBerry PlayBook is expected to be available in retail outlets in the USA in early 2011 and will be available in other countries in the second quarter of 2011. So, Indian people should wait till the 2nd Quarter 2011 to place your hand on the new PlayBook from Blackberry.

To start development and early testing efforts, RIM will begin working with developers and select corporate customers next month. The BlackBerry Tablet OS SDK is intended for release in the coming weeks and developers can register for early access at www.blackberry.com/developers/tabletos. RIM also plans to also offer 3G and 4G models in the future.

Price detail about the Blackberry Playbook is not yet declared. However, it is predictable to be cheap and placed in the lower end of the tablet market.