You are here: Home / Technology / MSI 3D Notebooks to be launched in mid-September

MSI 3D Notebooks to be launched in mid-September

Micro-Star International (MSI) will be launched its latest 3d notebook in Mid-September 2010. These laptops will use polarized glasses, just like the systems from Acer, LG Electronics, Fujitsu and Lenovo. MSI will be Launched 3D notebooks with the price tag below NT$30,000 (US$934). According to Internet rumblings, MSI will be one of the first to launch a 3D notebook. 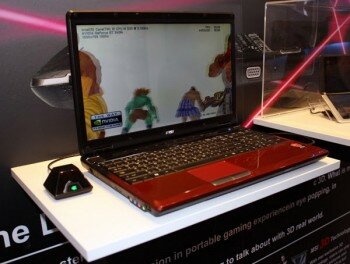 The new 3D notebook will use Intel’s included GPU for display and will feature Dynamic Digital Depth’s (DDD’s) TriDef 3D software for transferring 2D images to 3D. These new MSI 3D notebook absolutely carries a 15.6 inches with 120 Hz re-fresh rate and playback mode at 60fps and also powered by Intel Core i7 series.

MSI has equipped 3D notebooks in classic design entire with a pair of speakers and also a series of function keys with wireless system already.

In addition to MSI, Acer, LG Electronics, Fujitsu and Lenovo have all adopted polarized glasses 3D solutions for their 3D notebooks, while Asustek Computer and Toshiba will use Nvidia’s shutter glasses 3D solution, which has higher costs, the sources indicated.