A Japanese company, the Mitsubishi Group has all set to launch its “Diamond Vision OLED”, the world’s first large-scale OLED display system on September 21st. The 100-inch and above range screen is based on OLED (organic light-emitting diode) technology and is prepared mainly for the advertising and public display applications. 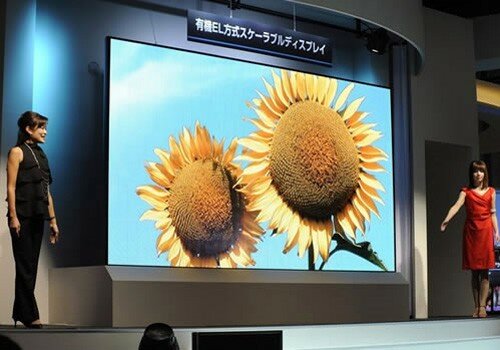 Mitsubishi OLED Screen can be built to almost any size by combining square display blocks, each display block measures 384 millimeters square and has a resolution of 128 pixels by 128 pixels. It can offer only 8.5dpi pixel density and was actually just a CEATEC prototype when it first came out last year. Each pixel is readily apparent due to up close the red, blue and green diodes and is larger than those in monitors or televisions.

The screen should be viewed from at least 2 meters away as per Mitsubishi. However, given its size it is improbable that viewers would want to get much closer. This large monstrous display does seem awe-inspiring; remember that it does not carry the HD love one would desire to have for his home theater setup. Screens are 99mm (3.9 inches) deep, weighing approximately eight kilograms (17.6 pounds) and brag a 1,200cd/m² maximum brightness level.

These displays are definitely intended for indoor use with viewing angles visible from ±80 degrees. Primarily, the screens are intended for digital billboards in settings such as airports and other commercial locations. The sets feature 1,200cd/m² brightness to the table alongside contrast which is about twice as bright as any of the company’s presently utilized LED-backlit sets. Rather than being one continuous panel, the TV’s display is made of individual modules expecting to see action in brightly-lit areas without any viewing problems whatsoever.

The Diamond Vision OLED is designed to flexibly form a certain size or shape, even against rounded surfaces. This device is mutually developed between Mitsubishi Electric and Tohoku Pioneer Corporation, generates light by a process of electro-luminescence (EL). Each pixel has an anode and cathode which are separated by a thin, organic membrane.

Hopefully, this will include the 155-inch prototype which was made of smaller display modules and showed bright, crisp images. On targeting outdoor and public display applications, Mitsubishi presently use LED screens for example the big screens in sports stadiums. For this OLED Screen, pricing was not announced yet. The new display will be showcased at this year’s Mitsubishi’s booth at CEATEC Japan 2010, which held during October 5-9 at Makuhari Messe in Chiba, Japan.