Micromax has already begun accepting pre-orders for the much awaited Canvas 4 smartphone on its official website. Interested buyers can pre-book this upcoming flagship smartphone by making an advance payment of Rs. 5,000. Micromax has still not revealed any information regarding its exact price, but the company has announced that it will officially launch the device on July 8 in a press event to be held in Delhi. In this event, Micromax will reveal all the features and official price of the handset. Now, after knowing the details of the smartphone, if you’re not satisfied with it then you can also cancel your pre-order and get the entire pre-booking amount refunded. Micromax has assured that in case of a cancellation, users will receive their refund within 7-10 working days. 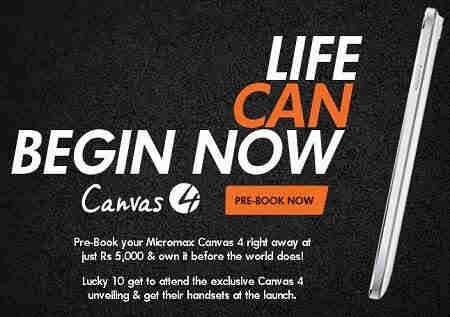 Once the official price of the phone is revealed, users are required to pay the rest of the amount (or cancel the order) before 15th July. If any consumer fails to do so, then his/her order will be cancelled automatically and the full amount will be refunded. There is no EMI option available for pre-orders, but buyers can pay the balance amount in three, six, nine and twelve equal EMIs. Canvas 4 will begin shipping from 10th July, and Micromax ensures to deliver the product within seven working days.

Although Micromax has not revealed any specs officially, the company has released a few pictures and two teaser videos of Canvas 4 online. These pictures and teaser videos clearly suggest that the phone will come equipped with a 13 MP rear facing camera with an LED flash and also there will be no physical Home button on the front of the device. A couple of days ago, Micromax uploaded an image of Canvas 4 device on Facebook, which hints at a new screen un-locking feature in the device (most likely a face-recognition technique).

It’s no surprise that there have been lots of rumors regarding Micromax Canvas 4’s specs and features. Some of the rumored features of Canvas 4 include: 5 inch Full HD 1920 x 1080p display, Android 4.2 Jelly Bean OS, 2/5 MP secondary camera, 2 GB RAM, the Mediatek 6589 chipset (Quad core), 16 GB memory inbuilt storage, and Dual SIM capability. Plus, it is highly expected that the device will cost around Rs 15,990.

Micromax has officially announced that 10 lucky people who pre-book Canvas 4 before 6th July will get an opportunity to attend the launch event of the smartphone where they will receive their own Canvas 4 handset. So, if you really want to own a Canvas 4 smartphone then make sure to place a pre-order as soon as possible. Visit canvas-4.com to place an order.