On 2nd September, 2010 Huawei has launched the first affordable Android smartphone, the IDEOS U8150, a handset which was designed in partnership with Google and running Google’s Android 2.2. Huawei Technologies Co. Ltd. is the largest networking and telecommunications equipment supplier in the People’s Republic of China. 2.8 inch touchscreen display with resolution of 240×320 pixel, 3.2 megapixel autofocus camera, 528 MHz processor and microSD card slot is featured in the Huawei IDEOS. 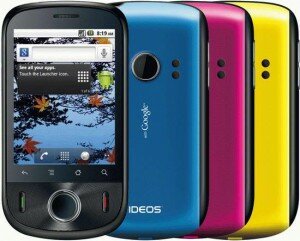 The Huawei IDEOS is available in four colors, yellow, blue, black and purple. It also has 3G WiFi hotspot for up to 8 devices, HSDPA, WiFi 802.11n, GPS, Bluetooth, Adobe Flash support, etc. The handset will provide downlink speeds of more than 7.2Mb/s, WCDMA and WiFi dual network support and also supports functions such as voice dialing, voice navigation, and the ability to run applications off the SD card, and compatibility with the Android Market application store.

The price of the IDEOS smartphone is between $100 and $200 which runs on Android 2.2 (‘Froyo’) and is designed to provide easy mobile internet access. According to Huawei, the IDEOS name is intended to reflect creativity and inspiration with ‘ID’ representing the industrial design-centric hardware platform, ‘OS’ standing for the operating system, and ‘E’ for the evolution to mobile Internet. The new android phone is probable to be released within two weeks in “a number of countries across Europe, Asia-Pacific, North America and Latin America”. Meanwhile, Huawei is planning to develop and launch a range of phones, including a tablet, under the IDEOS line.

Kevin Tao, CEO of Huawei Device, said: “The popularity of the smartphone is one of the key tools to bringing people into the ‘Golden Age of Mobile Broadband,’ which is linked to Google’s mobile Internet strategy”. He added, “We are proud to have already achieved our goal from early 2010 of developing a US$150 smartphone with an excellent user experience. The IDEOS is an affordable option, designed to lower barriers to entry to allow easy mobile Internet access“.

The handset is being branded as a “with Google” handset where user can find Google goodies including Android Market access as well as Gmail, Google Maps, Maps Navigation, Voice Actions and more all on-board. The E5S also has an upgraded OLED display while benefitting from a longer battery life. In addition, it is worth noting that the camera does not have a flash.

Video of Huawei’s newest smartphone with Google — IDEOS from YouTube: