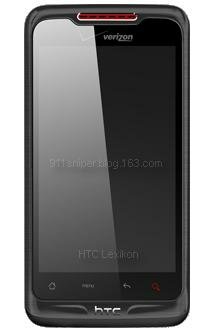 During the mid-August, HTC Lexikon and HTC Bee handsets specifications were leaked on the blog site named 911Sniper. The stated information says that the image gives us a clear look that we can expect. In case of touchscreen device, the mobiles have four soft-touch keys on the bottom.

The HTC Lexikon will be presented with an 800MHz processor, 512MB RAM, and 4GB of internal memory. The Android 2.2-powered device also features a 3.8-inch display, a 5-megapixel camera, and a slide-out QWERTY keyboard. The Lexikon will be featured with a factory-underclocked MSM7630 Snapdragon processor sounds a whole lot like the HTC Vision/G1 Blaze supposedly headed for T-Mobile that may or may not be the first HSPA+ Android phone.

While HTC Bee will be reveled with sounds like an earlier Android handset, with its 528MHz processor, 384MB RAM, and 512MB ROM. Other details include a 3.2-inch display and HTC’s Sense UI. The Bee is rumored as name Verizon and Cellular South and appears to be a great entry-level device. For a snappy little phone, Froyo will be also featured.

There are not any images to go with the specifications. To expectation about where exactly these phones will end up, it is not possible. They can ever materialize. Last December, the handful of HTC codenames was leaked, but none of which have shown up. However still, it is nice to listen about the outlook of a large range of devices appearance of the HTC camp.