You are here: Home / Technology / HTC Desire 816 vs Sony Experia T2 Ultra vs Lumia 1320: Comparison of specs and Price

Getting confused, which one is better to buy: HTC Desire 816, Nokia Lumia 1320 or Sony Xperia T2 Ultra? Don’t worry; take a look at the comparison of these mid-range phablets.

Large phone or small tablet, whatever you call it, the phablet is ongoing trend in the smartphone market. Big companies like Sony, Nokia and HTC are bringing large screen experience to the mid-range segment. Nokia launched Lumia 1320 a mid-range smartphone-cum-tablet in January, 2014 and Sony unveiled Xperia T2 Ultra in March, 2014. Now, HTC has come up with its very own mid-range phablet, the Desire 816, which gives a strong competition to Xperia T2 Ultra and Lumia 1320. People who want to buy a new MNC branded phablet at affordable price might be interested in HTC Desire 816, Nokia Lumia 1320 and Sony Xperia T2 Ultra. Here is a comparison of these three mid-range phablets. 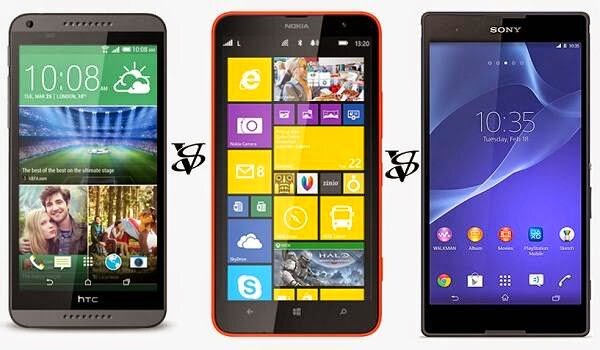 HTC Desire 816 made its world debut at the Mobile World Congress 2014. It is a good combination of impressive specs and beautiful built quality. It is the first HTC smartphone to have the premium design and flagship performance for incredible value. In terms of design, HTC Desire 816 looks similar to the HTC One, complete with front dual stereo speakers and HTC BoomSound.

The device is made up of a glossy plastic finish instead of all-metal chasis but it gives premium look and feels. It sports a unibody design with rounded corners. There are no physical buttons at the front. It uses onscreen buttons for navigation. The smartphone sports a big, 5.5-inch HD display with 267ppi. The HTC BlinkFeed keeps users up-to-date with real-time news stories, social updates, and notifications.

It is powered by 1.6 GHz quad-core processor to provide world-class speed and power. The processor is paired with 1.5 GB of RAM. It is based on Android with HTC Sense v5.5 UI. The android version has been not revealed yet. The device is a great choice for photography lovers, thanks to the two powerful cameras: 13MP rear and 5MP front. The 13MP rear camera comes along with HTC Zoe and automatic highlight videos.

All three smartphones have HD (720x1280p) display, which is pretty enough for a Phablet. The screen size of the Desire 816 is 5.5-inch with 267 ppi while the Xperia T2 Ultra and the Lumia 1320 have a much bigger screen size, 6.0-inch but reduced pixel density (245 ppi). The Xperia T2 Ultra screen also features Sony’s proprietary TRILUMINOS and BRAVIA Engine 2 display technology.