Additional Specs of HTC 7 Trophy has been freshly emerged with new image. This time it contains the new HTC Hub and the device now also recognized as the “HTC Spark.” It is powered by Windows Phone 7 Operating System and 1GHz Qualcomm QSD 8250 processor. Complete specification and features of HTC 7 Trophy are described below. 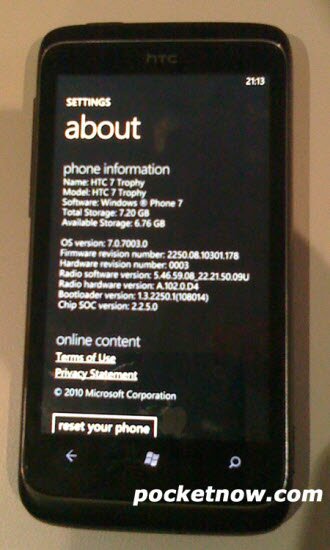 The upcoming phone would operate on the European 900/2100 UMTS/HSPA bands, making it the latest phone to be exposed as one of the WP7 devices caption towards Europe. The handset is also expected to pack a 5-megapixel photo snapper with auto focus and LED flash, and with a 2-step camera button.

HTC 7 Trophy contains the above specification and therefore it and would place the top-of-the-line. LG will have a wide selection of Windows Phones including range of upper-end E900 to the more modest C900. Samsung may only be bringing the Cetus to the party, but with a 4″ AMOLED screen. Vodafone will be picking up the HTC 7 Trophy but when Windows Phone 7 launches, it will find its way to most major carriers.