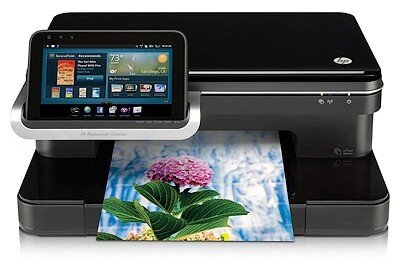 Before a month, the HP tablet did not include Gmail application and unsupported for Android Market. It is designed as TouchSmart UI with custom applications printing pictures from Facebook, Yahoo, Snapfish. The combination will include the Zeen tablet a capacitive touch screen slate running Android 2.1 as its core OS with a custom HP skin on top and the Zeus printer. Its most of essential functions are same as HP models. However Zeen tablet is come in it so it will enable web-centric functionality like internet printing, Barnes & Noble NOOK ebookstore access and more. The Zeen tablet has also rich interface to the printing functions.

Through HP Photosmart eStation C510, you can print ebook content directly from the Zeen on the Zeus, without an intermediary computer involved. Regrettably, the hardware’s leaked first-impressions are not particularly positive. The Zeen has capacitive touch buttons, an SD card slot, supports video and (on some prototypes) has a webcam, but touchscreen accuracy is said to be particularly shoddy.

The Zeen/Zeus package will come with expectedly cost of $399.99. It is expected that the shipping will be begun on September 20th (though that could well slip). Till now the prices of the Zeen slate is not revealed.

The Zeen is a capacitive tablet running HP’s TouchSmart skin on Android 2.1. It will not have webOS and it is not clear if it will get upped to Froyo before launch given the development time required. It has capacitive touch buttons, an SD card slot, video support, and at least some prototypes have cameras with a special webcam app installed.

Engadget stated that TouchSmart will be locked in, but they do not know how deep that will go. Presently, the standard Android homescreen is still accessible. That’s apparently going away, so do not get your hopes up for any native Gmail / Angry Bird use.

E-reading is a main focus and the Zeen has “significant” integration with the Barnes & Noble Nook bookstore and ecosystem. The Nook is based on Android and being able to print e-books from the Zeen would be a huge differentiator and a great way for HP to sell more ink.

Actually, the touchscreen is not very perfect at all, and Engadget told the overall experience is far less agreeable than a competent Android phone. So do not expect for replacing your Droid Incredible for all at-home use.

In two designs, the Zeen will come at $399 bundle with a new printer called Zeus and as a standalone unit for an unknown price.

The Zeus has its own “basic” control setup, but when the Zeen is including in it, it provides a rich interface to the printing functions presumably a web-connected interface like the one HP’s been moving towards with other printers.