Google Phone Gallery is being rolled out by Google which is a showcase of Android-powered smartphones. Google Phone Gallery assists consumers to decide which Android phone would be best for them by the process of comparing devices. The gallery, situated at www.google.com/phone which includes all the major Android manufactures along with most of the carriers that sell their phones. Google Search, Android Market and Google Mobile services such as Google Search, Gmail, YouTube and Google Maps are included in all the phones in the gallery. 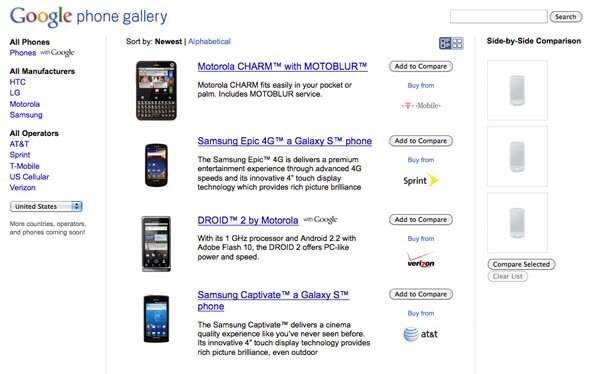 Android phones can be sorted by alphabetical order or release date. For side-by-side comparison users can even add up to three devices by selecting the Add to compare link for any phone on the home screen. Then select Compare Selected on the right hand side, below the Side-by-Side Comparison grid. The users can also go straight to the comparison page by pressing “Compare Selected” option. The users can filter phones by country, manufacturer, and carrier; view and compare technical specifications and features; and find where each phone is available for sale.

The Gallery is limited to only a few countries such as US, Australia, UK, Brazil, France and Germany etc, but Google will rollout this Gallery to more countries and more devices soon. Phones with Google Mobile Services are listed in the gallery. Currently, the Australian portal only includes phones from HTC or Samsung, leaving out the multitude of Android handsets from manufacturers like Sony Ericsson, Motorola, LG and Garmin-Asus, in spite of some of those manufacturers being accessible on international pages. The users can also report a mistake in the Google Phone Gallery by the link “Report a problem” given at the bottom of the page. Any problems including incorrect information, missing or wrong phone images, problems with the website, etc can be reported.