On Monday, The city of Chattanooga, Tennessee has unveiled Fastest Internet connection, with 1 Gigabit speeds being made available for both businesses and residents in the U.S. The United States is not famous for world’s speediest broadband connections, but Chattanooga, Tennessee is distinguishing itself by declaring plans to present the fastest Internet service of any city in America. 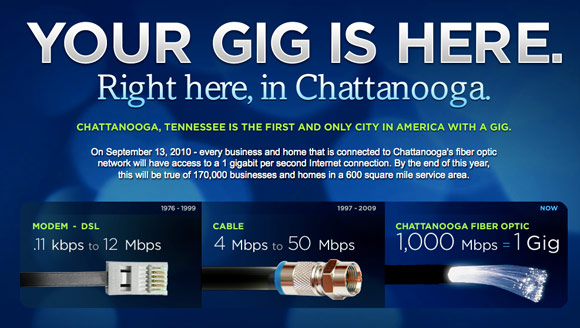 For providing fastest internet services, Chattanooga’s municipally-owned fiber-to-the-premises network has partnered with Alcatel-Lucent. It is available to purchase starting from 13th September, 2010. It will be the fastest household internet connection available in America. It will connect just a handful of consumer 1 Gbps providing worldwide, including the fastest connections in the city of Hong Kong. According to analysts, the service is almost 200 times faster than the average U.S. broadband speed. In the recent time, only few cities around the world offer fastest internet service. Over half of the top 100 cities with the fastest Internet connections are located in Asia.

According to City’s mayor, Ron Littlefield, “This makes Chattanooga — a midsized city in the South — one of the leading cities in the world in its digital capabilities.” Once every housing home and business unit inside the EPB’s 600 square-mile area, with nine counties, increase access to the new network, this business enterprise will eventually be the most extensive service within its industry across the United States.

Currently, most Americans access the web at speeds ranging from 3 megabits to 20 megabits per second, but a 1-gigabit-per-second speed could allow users to download HD movies in a matter of minutes.

EPB is offering fastest internet service to its 1, 70,000 customers though the $350-per-month rate may be expensive to most individuals and some small businesses. Harold DePriest, chief executive of EPB told the New York Times, “We don’t know how to price a gig. We are experimenting. We’ll learn.” Previous this year, Google released plans to make a new fiber-optic network that would deliver internet speeds of 1 gigabit per second to up to 500,000 Americans.