Chase online banking Website (chaseonline.chase.com) is Down today due to outage problem but this server problem doesn’t Affects ATM at all. Last night, the outage started showing the “temporarily unavailable” message on the main page of the site. 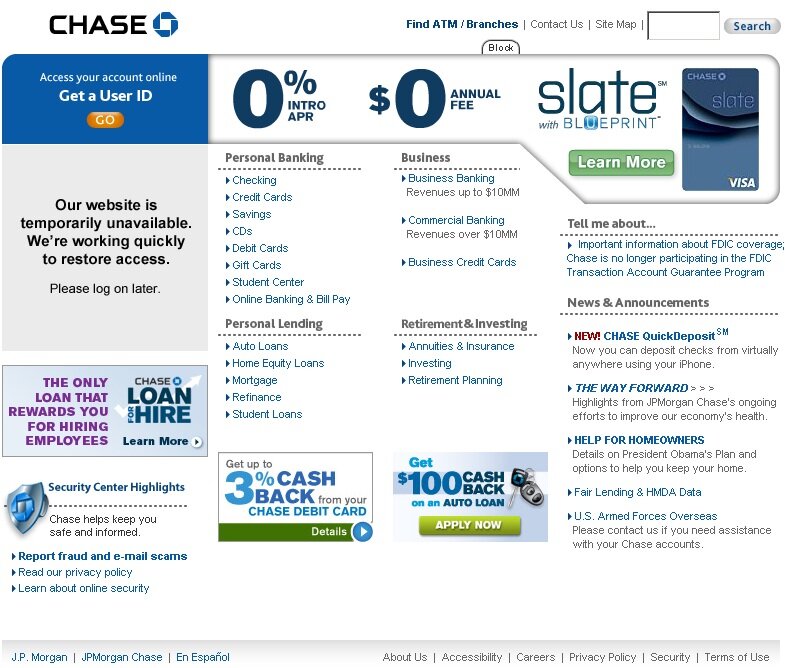 Chase retail banking and credit card transactions are down for last 18 hours due to technical issues that leaves 16.5 million bank customers without online services with chase. In recent memory, chase online banking site may be one of the longest outages by a major provider. The bank has $2 trillion in assets and 16.5 million customers who bank online and many are rising more and more frustrated with the lack of information and the span of this outage.

The website posted a message on its Chase.com portal asking customers to “log on later.” The cause of this prolonged system breakdown is not intricate by the chase officials. Christine Holevas said, “We’re working on restoring access. In the meantime, we encourage customers to either call us at 800-935-9935 or go to a branch if they have immediate needs.”

ATMs aren’t affected, and that the outage doesn’t involve a security breach as per Holevas. It is a technical issue, not a breach. Holevas did not specify the exact time about the working of the website. However, one spokesman told the Journal Sentinel that he has been trying to access the Chase site since 8 a.m. Tuesday.

The 2nd U.S. largest bank, chase is part of JPMorgan Chase & Co. According to FDIC records, it has 77 branches in Wisconsin and is the only larger bank of America.