To become the leading technology company in the world by market capitalization, Apple Inc. overtook Microsoft Corp on Wednesday.

Apple (inventor of the iPod and iPhone), which nearly collapsed in the 1990s, reached a new milestone as the world’s biggest tech company based on market value by overtaking Microsoft Corp. on Wednesday May 26, 2010.

It is the end of an era and the opening of the next one as per Wall Street: The most important technology product no longer sits on your desk but rather fits in your hand. 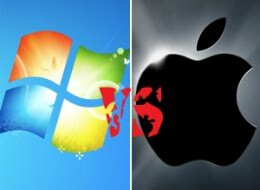 When the New York markets closed on Wednesday, changes in the share price values of the two are as follows: Washington-based Microsoft valued at $219.35 billion and California-based Apple worth $221.36 billion. According to Reuters data, Apple shares closed down 0.4 percent at $244.11 on Nasdaq, while Microsoft fell 4 percent to a seven-month low of $25.01.

However in sales, Microsoft still leads Apple. Microsoft reported $14.5 billion in revenue compared with Apple’s $13.5 billion in the latest quarter.

According to Thomson Reuters Datastream, the last time Apple had a higher market value than Microsoft in Dec. 19, 1989.

Both the companies have marched to success in contrasting styles, which founded around the same time, Microsoft in 1975 and Apple in 1976. Microsoft is an incredibly powerful and profitable company. Its Windows software runs 90% of the world’s personal computers while Office software is also vastly well-liked all over the world. And Apple is in the right place at the right time though it still sells computers, twice revenue is coming from hand-held devices and music. The company introduced the iPod music player in 2001, the iPhone in 2007 and now iPad tablet.

Ryan Jacob (a fund manager at Jacob Internet Fund in Los Angeles, which has Apple as its top holding) said, “Microsoft has been extremely weak over the last month, underperforming other technology stocks and that’s really what’s moved Apple into the leading position in terms of market cap.”