Lindsay Hayward is an American female wrestler. Currently, she signed with WWE and is to be a part of NXT season 3. On Last Tuesday, Lindsay Hayward has been dropped from NXT contract because of her few racy photos which shows Hayward being engaged in gay situations with another woman of a very small height. 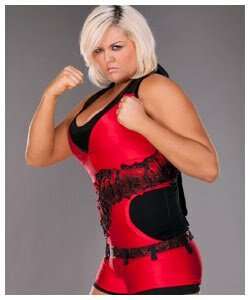 Hayward responded via her official website with the following comment: When I first received my offer from WWE, they asked me to fill out a “Talent Information Form” providing them with information about myself and my background. One of the questions was, “Have you ever posed nude?” I answered “No” to this question, because that’s the truth. If they had asked me if I ever posed suggestively, I would of course have answered “Yes”, but there’s a big difference between suggestive and nude. As to the question of whether this was why they took me off the show, that’s something you’d have to ask them. Perhaps it was a factor in their decision, but I honestly don’t know their entire thought process, as they’ve communicated very little to me about this. From what I’ve been reading on various blogs, it seems that they may have had a political motivation to get me off the show, but again, you’d have to ask them.