The Texas Rangers declared that Vladimir Guerrero and the Texas Rangers have finalized a one-year contract that also includes a second year that is a mutual option for 2011. Terms were not disclosed, per club policy. On 11th January, 2010 Monday, Guerrero passed a physical at the Medical Center of Arlington. 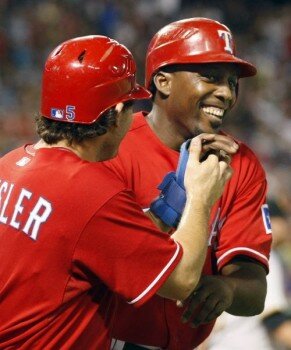 The deal is for $5.5 million which includes performance bonuses. If the club elects not to exercise the option, Guerrero gets $1 million. He can walk away from the contract without penalty after 2010 if he selects. One of the big reasons that the Texas Rangers wanted to sign him was because they needed a good power hitting designated hitter, but it also doesn’t hurt that Guerrero has found a lot of success hitting at Rangers Ballpark in Texas.

Guerrero, who has 426 career homers, said he hoped to stay healthy long enough to hit 500. “The main thing is I thank God for the health that I’m having,” Guerrero said through an interpreter. “That’s the main thing that I’m praying for, to be healthy and try to keep playing and prepare. Sometimes you forget that you have to be ready, you have to prepare. But thank God I’m doing whatever I need to do to stay healthy and keep playing good.”

General Manager Jon Daniels said, “We’re excited to welcome Vlad to the Rangers family”, “This is a guy we’ve both admired and feared for years from across the field. He’s been one of the most dangerous hitters in the game for over a decade. He’ll bring a presence to the middle of the order, and a winning pedigree to the club.”

Guerrero may be older and may come cheaper, but the Rangers know first hand that it doesn’t matter how slowly Guerrero walks to the plate, what matters is how quickly he turns on anything near the strike zone. And by placing him in the middle of the lineup regularly, the club expects Guerrero to produce; they also expect him to make the rest of the lineup more threatening.

3B Michael Young, who will likely move to second in the lineup for Guerrero said, “We absolutely do not look at him as a complimentary player“. He also added, “He is a first ballot Hall of Famer. He is one of those rare guys in the game nobody has to talk about how good he is, because we all know how good he is. He was a little banged up last year. People see that he’s going to be 35 and they focus on predicting when he’s going to decline rather than see just how good a player he is. He is still a very good player.”

Guerrero, who turns 34 on February 9, has spent the past six seasons with the Los Angeles Angels of Anaheim. He batted .295 with 15 Home runs and 50 RBI in 100 games for the Angels last year. Guerrero hit .300 with at least 25 Home runs over 11 consecutive seasons from 1998-2008, joining Lou Gehrig (1927-37) as the only players in major league history to compile such a streak over a period of that length.

The Rangers intend to get Guerrero in the lineup as much as possible as the DH. They need to get him out there for more than the 100 games he gave Los Angeles last year. If they do, the club is certain it didn’t get somebody who will simply compliment the rest of the lineup; it got somebody who can make an impact.