You are here: Home / Sports & Games / Venus Williams in US Open Outfit Photo

In US Open, Venus Williams was dressed in pinkish-red, sparkle-motion outfit which seems like a fashion statement to many fans and photographers. Venus Williams’ latest U.S. Open outfit is drawing plenty of attention. 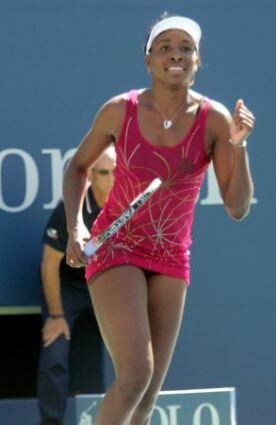 Venus is still playing but her sister Serena Williams is out of the 2010 U.S Open and like other times spectators are waiting apprehensively to see what her outfit is going to be or what is she going to be wearing underneath.

On Sunday’s match, she wore the different dress and defeated No. 18 seed Shahar Peer in straight sets. The thing that tennis superstar Venus Williams worn such an unconventional tennis outfit is not happed for the time. She had worn black, lacy number with flesh-colored undergarments which raised few eyebrows at French Open in the month of May.

“This outfit was supposed to be about New York. It’s like bursts of fireworks,” said Venus Williams on her latest selection. She wore shorts under her pink shirt with fireworks and explosions on it. It was similar to the one she wore three days before, different colors though. There are pictures and the video about that glittering outfit below.

Because of her outfit and fashion sense she feels proud on herself. In her costume, there is no bottom half and maybe she was sporting the very chic, Lady Gaga-inspired no-pants look.

She also has her own personal an interior design firm. Earlier Williams earlier had clothing line with Steve and Barry’s Sports store.

Venus Williams dancing at US Open video from Youtube: