The Fifa World Cup semi-finals will be taken place with the four competitor teams at the ground including Spain, Germany, Uruguay and Netherlands. Uruguay Vs Netherlands match is going to play Green Point Stadium, Cape Town on Tuesday July 6, 2010. And semi-finals between Germany and Spain will be played on July 7, 2010 at Durban Stadium. 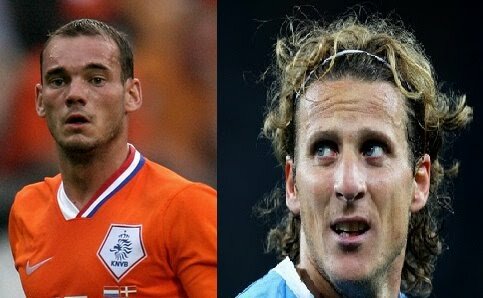 Previously, Uruguay became champions in the year 1930 and 1950. This semi-final is their first semi-final since 1970. They also failed to qualify for five of the last ten finals. Netherlands is the only nation to have lost two finals in a row in 1974 and 1978. They have also made the semis twice.

Before 12 years, the Dutch made it to their first semi-final in two decades beating the Argentina and Yugoslavia on their way to the last four and only to lose to Brazil on penalties. In this match the favorite team Brazil out of the tournament. Orange have truly given themselves a great chance of winning their first ever World Cup.

The South Americans survived a dramatic finish to extra-time in their quarter-final against Ghana. Star striker Luis Suarez was sent off for handling the ball on the line, but Asamoah Gyan failed to convert the resulting penalty forcing a penalty shootout in which Uruguay triumphed after goalkeeper Robert Muslera saved two shots from Ghana. Uruguay coach OscarTabarez said the handball was instinctive from Suarez, who misses out on the semi-finals.

Netherlands scripted the shock result of the tournament bundling off five-time winners Brazil by a 2-1 margin. Robinho had opened the score for Brazil in the 10th minute, but an own goal from Felipe Melo and a superb header from Wesley Sneijder gave the Oranje a great win. Netherlands coach Bert van Marwijk will be without Gregory van der Wiel and Nigel de Jong for this game after the pair picked up their second booking of the Cup in the match against Brazil.

According to FIFA World Rankings, the Brazil has got 1st rank, while Netherlands ha got 4th rank and Uruguay has got 16th rank. The manager of Uruguay team is Oscar Tabarez and Netherlands’s manager is Bert van Marwijk.

Uruguay will be not included creative midfielder Nicolas Lodeiro because he has fractured a bone in his foot. Forward Luis Suarez and defender Jorge Fucile are suspended from the match. The Fenerbahce defender limped out of his country’s quarter-final with Ghana after just 38 minutes with a knee injury, and is now a major doubt for the South Americans.

Lugano has been one of the star performers for La Celeste so far, helping them top a tough Group A, which also included hosts South Africa, 1998 winners France and Mexico. They have since beaten Korea Republic 2-1 and Ghana on penalties to seal a first semi-final appearance in 40 years. But the 29-year-old concedes the short turnaround between games is making his race to be fit for the last-four game in Cape Town increasingly difficult.

Uruguay striker Diego Forlan has scored four goals at World Cups, all against African opposition. Forlan’s father Pablo played in the two countries’ only World Cup meeting in 1974. Netherlands are the only team at the tournament to have won all of their matches.

Arjen Robben and Wesley Sneijder are performing at their highest after some absence in the first matches of this competition. “Uruguay’s players are fighters and survival artists. They are a dangerous rival, I like the way the play” were Netherland’s coach, Bert van Marwijk regarding this match. After drinking Carioca’s blood the team is ready to claim his 25th match undefeated, knowing they’re probably the favorite for the title at the moment.

Netherlands team will have to do without midfielder Nigel de Jong and defender Gregory van der Wiel. There have not yet been any official declarations regarding the starting eleven, but thanks to his performance in the last minutes of the Brazilian match Klaas Van-Huntelaar might have a chance within the starting squad.

It’s been almost two years since the Orange suffered its last defeat, and thus it’s impossible to ignore they are the favorites for this clash. Uruguay’s players should be exhausted after their last match, and the Dutch are known by turning any minor detail into a loose advantage, as it was proven against Dunga’s squad.

Netherlands coach Bert van Marwijk is predicting a battle royal against the “fighters” of Uruguay in Tuesday’s semi-final but believes his Dutch players have added some steel to their renowned brand of attractive football.

The Dutch coach, Bert van Marwijk says, “The euphoria back home is incredible.” The 20,000 Dutch expats in Cape Town may match that fever. The Uruguay coach, Oscar Tabárez says, “Netherlands are favourites. It’ll be difficult but not impossible.”

If Netherlands are to win the world cup and firstly beat Uruguay they will need both of their star players – Wesley Sneijder and Arjen Robben to dish out a performance of the same intensity. Netherlands will have the full support of their Oranje brigade!