Chicago hockey team Blackhawks has finally noted a winning registry to its name after long long time (since 1961). Finally Patrick Kane scored the overtime winner, and they erupted. 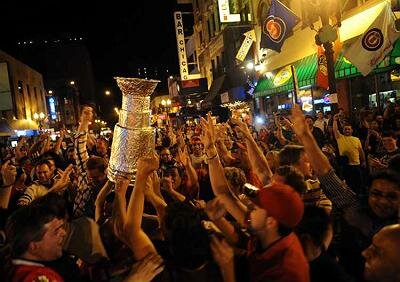 The Blackhawks had scored nothing in five finals since their last Cup victory until Kane’s goal of the series. It is a shot from the bottom of the right circle that went under the stick and pads of Flyers goalkeeper Michael Leighton.

It is the first Cup for the team’s coach Joel Quenneville, a man to participate in at least 800 Nation Hockey matches as both a player and a head coach. The Blackhawks winning the Cup ends the longest active championship drought in the NHL.

“I’ve been waiting my whole life for this,” sobbed Jonathan Holubiak, 29, as delirious fans flooded into the streets chanting “Let’s Go Hawks!,” singing the Blackhawks unofficial anthem, “Chelsea Dagger” and, finally, deliriously, “We Are The Champions.”

Even Blackhawks legend Bobby Hull had tears in his eyes as he celebrated at Harry Caray’s downtown. “If I’d have missed this, I’d have missed a big part of my life,” he said.