Indian top badminton star and World No. 2 Saina Nehwal was bestowed the Rajiv Gandhi Khel Ratna Award for 2010, the nation’s highest national award in sports, for her sterling performance in badminton this year at a stunning ceremony. 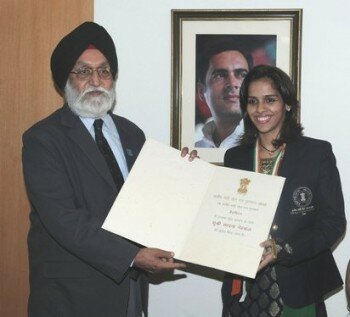 Saina Nehwal could not receive the Award on event when the National Sports Awards were bestowed by the President of India on 29th August, 2010 as she was in Paris taking part in World Championship. As India’s highest sporting honour, the award carries a medal, citation and cash prize of Rs. 7.5 lakh. To tribute World No. 2 Badminton Player, Saina Nehwal with this award, PT Usha has decided the 15 member panel for the National sports awards (Rajiv Gandhi Khel Ratna, Arjuna and Dhyan Chand) selection committee.

Last month in Commonwealth Games, she won the women’s singles gold medal. She was bestowed the Arjuna Award last year and at the Olympics she was the first Indian to achieve the singles quarterfinals in Beijing. She was also the first Indian to win the World Junior Badminton Championships. In the last one year keeping in view the young player’s extraordinary accomplishments, she was an apparent selection for the highest sports award in India.

After receiving the Khel Ratna Award, Saina said, “I feel it is now my duty to give the best for my country, which has given me so much. There will be fierce competition in the Asian Games. Since the Games are held in their country, the Chinese players would be all out to bag all the titles at stake.”