Two major players Sahara India Parivar and Bharti Airtel submitted bids for the right to sponsor the Indian team for the next 3.5 years.  According to some sources in BCCI (Indian cricket board) the two groups have already submitted the eligibility documents and security deposits on Saturday. Both companies have submitted the mandatory Rs 50 crore (US$10.7 million) deposit required by the BCCI.

The Indian board issued the tender on Monday inviting companies to bid for the rights, whose tenure is three-and-a-half years beginning July 1, 2010. Other companies in the fray included the ADA Group (ADAG), consumer electronics major Videocon, Delhi-based Monnet-Ispat, sports broadcaster Nimbus, which owns the rights to matches played in India, and advertising firm Percept. 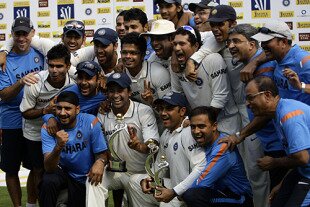 Bharti, though, seem to have a problem on hand. If it wins the bid, it cannot display its Airtel logo during ICC events because of a clash of interest -Reliance (another telecom company) is one of the ICC sponsors.

Reliance’s contract with ICC ends in 2015 while the Indian team’s logo sponsorship will end on December 31, 2014. In the next three-and-half years, the Indian team is scheduled to play in three ICC tournaments – 2011 World Cup, 2012 T20 Championship and 2013 Champions Trophy.

The lack of interest in the tender six months ago and the subsequent lowering of the base price represents “the impact of the IPL,” according to Hiren Pandit, Managing Partner-Entertainment, Sports and Partnerships at Group M, a prominent media buying agency. Pandit believes the IPL gives firms an alternative avenue to get involved with cricket, thereby reducing the exclusiveness of the Indian team.

After winning the bid for the Pune IPL franchise, Sahara chairman Subrata Roy had said the company would re-evaluate its sponsorship of the Indian team. Subsequently, when contacted by Cricinfo, the company declined to comment to on whether it would be bidding this time around. The Sahara Group had paid roughly Rs 400 crore in 2005 for the right to sponsor the Indian team for four years.

Shailendra Singh, joint managing director, Percept Limited, which had reportedly purchased the bid document for a client, says the Indian team is still the best cricket brand around. “From a value perspective, the sport of cricket stands unparalleled as a property for sponsors today,” he said. “For any fan, especially in India, the national team is the ultimate. People follow IPL because you have the cricketers from the Indian team playing, they are the main attraction. Hence this in no way reduces the importance or following of Team India. Team India will be one of the best cricket properties always.”

The BCCI will announce the winning bid after holding its marketing committee meeting in Mumbai on Monday.