Pacquiao vs. Margarito Weigh-in event was held on 13th November, 2010 at 6:00 PM ET. Both the competitor fought at Cowboys Stadium, Dallas, Texas. In this event, Margarito scaled right at 150lbs on weighing scale while Pacquiao weighs light at 144.6lbs. 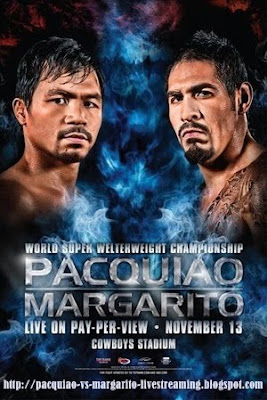 For the WBC’s vacant junior middleweight belt, both Margarito and Pacquiao was able to make the 150 lbs catch weight limit. It seems that, the venue of the event was packed with boxing enthusiast. Previously, Pacquiao fought with Joshua Clottey of Ghana. The match was held on same venue.

Emmanuel Dapidran Pacquiao is well-known as Manny Pacquiao. He is a Filipino professional boxer and politician. He is the first boxer in history who won nine world titles in seven different weight divisions. Pacquiao also won title of the lineal championship in four different weight classes. The Boxing Writers Association of America (BWAA) named him as a “Fighter of the Decade” for the 2000s.

Antonio Margarito Montiel is an American professional boxer of Mexico. He is rated at Light Middleweight, Welterweight, Light Welterweight and Lightweight. Former IBF Super Featherweight Champion Roberto García is the trainer of Margarito. IBF Lightweight Champion Miguel Vazquez is managed by Antonio. He lived with his wife, Michelle Margarito in Tijuana.

Video of Manny Pacquiao vs Antonio Margarito (Trailer) from YouTube: