Indian Cricket team is all set to be seen in new clothes in the World Cup 2011 as the official apparel sponsor Nike unveiled new Jersey with same bluish color but extra Orange. The revealing function of the new attire for Indian cricket team was held at Chandigarh on 29th September, 2010. 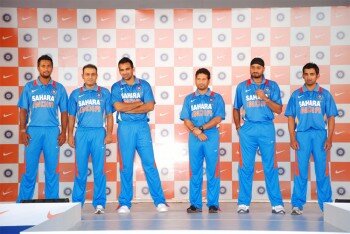 Sachin Tendulkar, Zaheer Khan, Harbhajan Singh, Pragyan Ojha, Gautam Gambhir and Virender Sehwag attended the launching ceremony of Nike Chandigarh. Captain of Indian cricket team, M S Dhoni was not present at the launching ceremony as he had just arrived in the city on Wednesday after being in South Africa for the Champions League Twenty20.

The current Jersey of Indian cricket team (Dark Blue) was introduced during last year 2009. The new jersey is capable of keeping the body temperature down to comfortable levels, as said by the BCCI’s apparel sponsors Nike. Also, Nike claimed that the jersey will not stick to the skin during sweating and is capable to control the humidity.

Gautam Gambhir said that he was looking forward to the two-Test series against Australia which will be started from 1st October. Fast bowler of India, Zaheer Khan said that he was spending much time on his fitness nowadays. Sachin Tendulkar took the opportunity and said that he would continue playing as long as he enjoyed his cricket.

The World Cup 2011 is scheduled to be held in Asia (India, Pakistan, Sri Lanka and Bangladesh). Keeping the comfort level of players, the new attire is manufactured.