During the every season, the NFL (National Football League) sets famous performers featured show as opening. This year, 91st season NFL 2010 has kicked off with National Anthem by “Bubbly” singer, Colbie Caillat at Louisiana Superdome, New Orleans. Colbie Caillat has presented her performance by singing National Anthem on football ground. 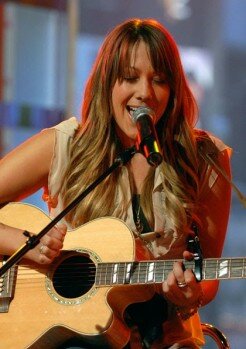 Before every sporting event, the anthem is sung by celebrity performer. Colbie Caillat’s performance has created such attention before the start of the Minnesota Vikings vs New Orleans Saints game. Caillat was selected to sing the national anthem from dozens of performers before football games this year. Dave Matthews and Taylor Swift have also performed with a pre-game concert in Jackson Square. The pre-game concert was tele-casted on both broadcast networks and the NFL Network on cable. The Canadian Tenors has performed the Canadian national anthem before the game, and country-pop hit maker Colbie Caillat has sung God Bless America during the 7th inning.

California native, Colbie Marie Caillat is an American pop and country singer, songwriter and guitarist. She debuted albums include Coco, Breakthrough, and upcoming TBA which will release in November/December 2010. Breakthrough was nominated for Best Pop Vocal Album at the 52nd Grammy Awards in 2009. She was also nominated two times for Best Pop Collaboration, for her featured vocals on Jason Mraz’s “Lucky” and her background vocals and writing on Taylor Swift’s Breathe.

The NFL 2010 season has started at 8:35 p.m. EDT on Thursday, September 9, 2010 at Louisiana Superdome, New Orleans, Louisiana among the Super Bowl XLIV champion New Orleans Saints hosting the Minnesota Vikings in a rematch of the 2009 NFC Championship Game.

The New Orleans Saints hit the Minnesota Vikings 14-9 in the NFL season’s opening game. The defending Super Bowl champion Saints took the lead quickly by a 29-yard pass from Drew Brees to Devery Henderson in the first few minutes of game. The Vikings came back in the second quarter with a field goal and a 20-yard Brett Favre touchdown pass to Visanthe Shiancoe (the extra point was blocked) and giving Minnesota a 9-7 halftime lead.

Saints running back Pierre Thomas completed the scoring with a third-quarter touchdown run. Brees completed 26 for 36 threw for 236 yards, and Favre completed 15 for 27 threw for 171 yards. The 2010 season has been ongoing. The rest of the teams of NFL will kick off their seasons on Sunday. The league’s championship game, Super Bowl XLV is programmed to be played at Cowboys Stadium in Arlington, Texas on February 6, 2011.