History has been created by Sri Lankan cricketer Muttiah Muralitharan because 800th Test wicket was grabbed by him during the last day of the first Test match against India in Galle. He is the first bowler who takes 800 test wickets. 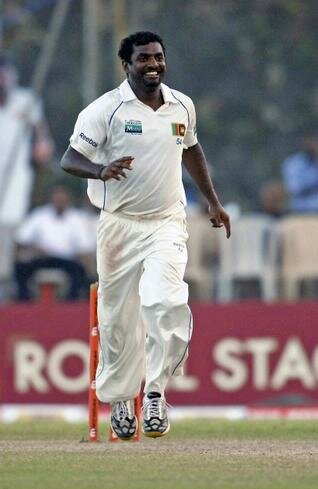 When Muralidharan picked up the wicket of Pragyan Ojha on the last day of the Test match against India at Galle, the milestone was attained by him. The 38-year-old off spinner had Pragyan Ojha caught at slip by Mahela Jayawardene at Galle International Stadium. In the second innings, India booked 338 runs. As 800 wickets, Pragyan Ojha was the last victim of Murali. For leading to Sri-Lanka on board, 95 runs have been given by India. Total eight wickets in the test match and three wickets in second innings were bagged by Murali.

Muralidharan completes with 800 Test wickets at 22.72 in 133 Tests. He took five in an innings on 67 occasions. His statistical achievements run to pages. Murali was carried from the field by jubilant teammates and saluted the crowd, ball held aloft. Dhoni and Yuvraj are also removed by Murali to finish with a tally 5/63 in the first innings. He was starting with the wicket of Sachin Tendulkar.

22, 10-wicket hauls has been taken by Muralitharan in his Test debut in 1992 against Australia in Colombo. Previous, Harbhajan Singh had been trapped by Murali in front of the wicket to pick up his 799th Test wicket. A year later he captured his first five-wicket haul in Tests against South Africa with figures of 5-104. 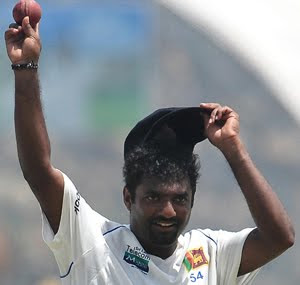 Against New Zealand in 1995 his 19 wickets in Sri Lanka`s 2-1 series victory proved his match-winning qualities on any surface. The first Sri Lankan was become to reach 100 Test wickets by him on March, 16, 1997. He took his first 10-wicket haul against Zimbabwe in the first Test in January 1998. Career best figures of 16-220 were produced by Muralitharan in a one-off Test against England in August 1998.

By reaching 500 wickets during the second Test against Australia in Kandy, he became the fastest and youngest bowler on March 16, 2004. Muralitharan had reached the landmark just four days after Australia`s Shane Warne had done so on the fifth day of the first Test. Having tussled with Warne for the leading Test-wicket taker status in the following years, Muralitharan reclaimed the record in December 3, 2007 against England with his 709th wicket.