Since July 19, 2010 Former NBA star Lorenzen Wright, 35, had been reported missing, just hours before he was supposed to ride back to his townhouse in the Atlanta area with a friend and his six children. As per Memphis Tennessee’s Commercial Appeal reports, Lorenzen Wright has been found dead in a wooded area at Hacks Cross and Winchester in southeast Memphis. 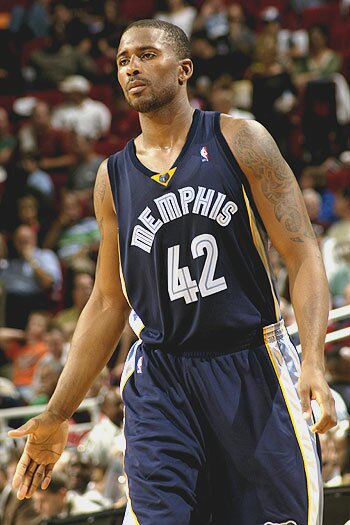 On 28th July, 2010 Lorenzen Wright’s relatives and friends assembled and grieved for the former NBA player who has been missing for 10 days, as police investigated the discovery of a man’s body outside of Memphis. Lorenzen Wright was last seen in his ex-wife’s, Sherra Robinson Wright home near Memphis on 19th July at 2am and at that time was supposed to be carrying some amount of money when he went missing. On 23rd July, his family filed a missing report and said that they had feared that Lorenzen had been victim of foul play — suspicions the police initially downplayed.

Law enforcement sources who confirmed the discovery of Wright’s body to press say a 911 call was made from Wright’s cell phone shortly before he vanished, and that background noises indicated the former Clippers player was in danger: In the early [email protected] of July 19, a Germantown dispatcher received a 9-1-1 call from Lorenzen Wright’s cell phone. The dispatcher heard a garbled male voice utter an expletive, then at least 10 gunshots. “Hello? Hello? Can you hear me?” the dispatcher asked. Then the phone went dead. The dispatcher called back. No one answered.

Hundreds of Wright’s friends and fans, including kids on bicycles and women pushing strollers, rushed to the scene Wednesday where the body was found, in an area across the road from the TPC Southwind golf course near Hacks Cross and Winchester. Cars lined Hacks Cross as far as the eye could see, some with their lights flashing. Some people cried and watched as a news helicopter circled overhead. Some took photos of police officers and each other with cell phones. By nightfall, nearly 200 people had visited the road blocked off by police while TV news helicopters showed investigators scouring the grounds for evidence. Police brought in a mobile command center that further blocked off the scene.

The family issued a statement through a cousin of Lorenzen Wright, Camella Logan: “Lorenzen’s family has come together to mourn his loss and honor his legacy. We appreciate your thoughts, prayers and condolences as they are comforting at this very difficult time. Additionally, we ask that you please respect our privacy as we try to cope with his sudden loss.” On Wednesday night, Wright’s mother, Deborah Marion, arrived at the scene with a handful of family members. She crossed the crime scene tape and tried to talk to police when she was told to move back. She sat in a TV van before returning to the tape. Two officers then let her through.

Wright, 34, described by friends as a dedicated father, leaves behind two daughters and four sons, ages 4 to 15. He visited his children July 18 at his former wife’s home in Collierville. He was supposed to meet them the next day to take them back to his home in an affluent northern suburb of Atlanta so they could spend the rest of the summer with him, said family friend Jeremy Orange. Orange said, the children had spent most of the summer with their father, who took them to the movies, amusement parks and the swimming pool and helped them with their basketball skills.

Wright had asked Orange to drive the children to their mom’s Memphis home July 16 because oldest daughter Loren, 14, was competing in a beauty contest. Orange said Wright, known to friends as “Ren,” hugged each child and gave Loren a kiss goodbye as they left the Atlanta area.

Elliot Perry, another friend and former Memphis player, was also at the scene. Wendy Wilson, who once worked as Wright’s personal assistant, was also there and said Wright often used the road police had cordoned off as a shortcut to his mother’s house. Wilson said, “He was a good person. He did not deserve to die this way. God is not pleased with this”.

Grizzlies majority owner Michael Heisley issued a statement late Wednesday, saying: “We are deeply saddened by the tragic death of Lorenzen Wright. We lost a member of the Grizzlies family. Lorenzen delighted fans on the court with his passion and off the court with his generosity in a Memphis community that watched him grow throughout his playing career …”

Video of Former Basketball Star Vanishes in Memphis from YouTube: