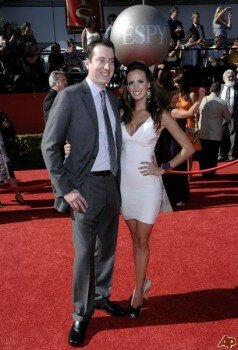 Apparently, the show is believed to be focused on the life of Kyle Busch. However, his wife Samantha ends up receiving a large amount of camera time. The show is started on 13th September, and runs until 17th September on ESPN 2. The series documents the life of Busch starting this past weekend at the NASCAR Sprint Cub Series raced at Richmond International Raceway and continue they prepare for their wedding.

The show is almost in real time unlike most reality TV shows and gives viewers almost a live look at the couple’s life. It has unprecedented production turnaround with some footage being shot less than 24 hours. Samantha is very attractive and appears as although she is trying to get her name out there so as to possibly get some future gigs on TV or the big screen.

For the Sprint Cup ranked fourth, Busch enters the Chase and the first race starts on Sunday, Sept. 19, at the New Hampshire Motor Speedway. Some funny exchanges are shared by this pair for example when they look through a photo album and Busch tells Sarcinella, “You look like a hooker.” On replying, she tells, “We won’t be sending that one to my grandmother.”