Under-fire World Cup referee Uruguayan Jorge Larrionda was no stranger to controversy prior to his blunder in the World Cup last 16 match between Germany and England on Sunday. Referee Jorge Larrionda’s error in failing to spot that Frank Lampard’s first-half shot against Germany had crossed the line has an unnerving sense of familiarity. 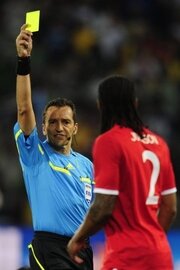 The Uruguayan official, once suspended for six months by his country’s Football Association for alleged ‘irregularities’, was at the centre of a World Cup storm in South America six years ago for just the same reason. Larrionda, who ruled along with his linesman that England midfielder Frank Lampard’s shot had not gone over the line when it clearly had and which would have made the score 2-2 with Germany before half-time, was suspended in 2002 for six months by his national Football Association over ‘irregularities’.

In a key qualifying clash between Brazil and Columbia, Larrionda deprived the world champions a winner midway through the second half when a close-range effort from substitute striker Adriano bounced down off the underside of the crossbar and landed half a metre behind the line.