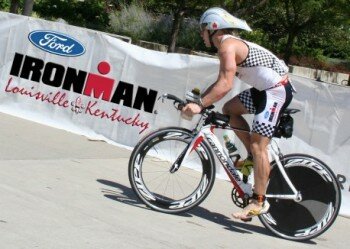 In men’s race, Martin Jensen approached in second just about 12 minutes behind Ambrose in a time of 8:41:54 and Max Longree of Germany crossed the line in 8:50:10. And other side of the race in women’s race, Kim Loeffler ten minutes behind Rebekah Keat and crossed the line at 9:44:23 and close on her heels was Hawaii’s Bree Wee in third in 9:50:35.

Rebekah Keat has called Australia her home who claimed her second official Ironman title. To take the race run in Louisville’s hot and humid conditions, both used stellar bike splits to ride away from their competition.

Jeff Schneider, Interim Executive Director of the Greater Louisville Sports Commission says, “This is one of the biggest amateur sporting events that has ever been to Louisville and the state. The city and state have embraced Ironman and we look forward to continuing to combine the athletes’ passion for Ironman with Louisville’s ongoing enthusiasm and support for sports.”

The temperature of Louisville was 79o F (26 o C) at 5:00a.m. on yesterday morning. In the 84 degree waters of the Ohio River, all athletes swam. After going out the water about three-minutes behind swim winner John Flanagan who is a former winner of the Waikiki Rough Water Swim in his home town of Honolulu, Ambrose progressively took control in the 112-mile bike ride and held on into the marathon portion. He walked and completed 26.2-mile run in front of Denmark’s Martin Jensen and Australian Jason Shortis entering T2.

For the entire marathon, Shortis would ultimately walk much of the run because of stomach issues and Martin Jensen remained in second position. In his first major race, Max Longree was getting hit by a car three days before last year’s Ford Ironman Arizona race and, remained in third position.

Rebekah Keat said, “It’s awesome. It must be Australian domination at the moment.”

Ambrose said, “I loved it, There’s nothing worse than having to race for over eight hours then stressing out a sprint finish. I wanted to soak it up. It was a good feeling being out there and finally walking. I could relax my legs. I could just soak in the crowd and atmosphere of Fourth Street Live. It was fantastic.”

He also added, “The run started off nice. It was quite pleasant. Then about the five-mile mark the heat just soared. You’re caught between running the race and just survival. It’s panic-mode just trying to get your hydration in and not trying to cramp. And hoping the fast runners don’t catch me. It worked well in the end.”

In the marathon, Ambrose ran (3:05:10) slower than Jensen (3:03:37) and German Max Longree (2:55:29). The race was the first Ironman-distance race Jensen finished and Ambrose’s first time at Ironman Louisville. In Copenhagen, he suffered a flat tire before two weeks. He was troubled by cramps on Sunday.

The 32-year-old, Keat saw someone holding an Australian flag and she asked for it and held it high to celebrate her second Ironman victory. She said that the victory was difficult.

Keat said, “I just saw a gentleman standing on the sideline. He said, ‘Aussie, Aussie, Aussie.’ I said, ‘Oy, Oy, Oy.’ That’s our chant. I asked, ‘Could I borrow your flag?’ I always like to be patriotic. Americans always have your flags out. I wanted to chuck the Aussie one up.” She also said, “It was a struggle. I was pretty tired.”