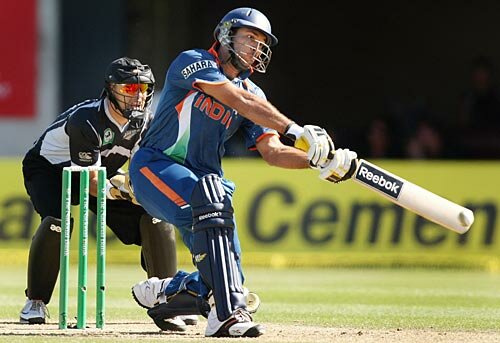 This is a Tri-series between India, Srilanka and New Zealand. In this match, Indian team do not include Sachin Tendulkar, Gautam Gambhir, Harbhajan Singh and Zaheer Khan. The New Zealand team is playing the tri-series without two of his most important player. New Zealand is not a full strength side. Daniel Vettori and Brendon McCullum were out the side to take paternity leave, while Jesse Ryder is injured and out of reach.

The pitch report is that “No cricket has been played here since the Asia Cup which means there will be plenty of juice in the fresh, greenish track on Tuesday. The boundary ropes have been pulled in at least 10 metres from where there were during the Asia Cup.

New Zealand have won the toss and elected to bat first at the flat wicket of Dambulla Cricket Ground.

After winning the toss, the Kiwi captain Taylor said, “The ball does a bit in the night and we that we can post a good total. We are a little bit light on experience, with the absence of Vettori and McCullum.” He added, “We hope that Kane Williamson and Andy McKay step up to the plate. A total in excess of 250 will be a good total.”

The Indian skipper Dhoni said, “Thankfullly, no injuries going into this game. Ashwin, Saurabh Tiwary and Kohli miss out for this game.”

“We have had a couple of days time after the test series, we have just had one day for practice and it is indeed tough, but we hope we’ll put forth our best performances,” said Dhoni.

India is trying their hand, which had been in the Asian Cup. The good thing from the perspective of India is that they have played three test matches and have already had a pretty good idea of the locations. They should also remember that the lights at Dambulla are not too well and after playing under the lights would have been practical to do so.