On the fourth day of the 2nd Test match, Harbhajan scores 100 against New Zealand in Hyderabad to take India to a good situation. He became the first No. 8 batsman who scores back to back Test centuries. The name of the player is recorded in the record books. Harbhajan was on 85 and Sreesanth not out on 14 runs and the total score of India was 436/9 at the end of the 4th Day. 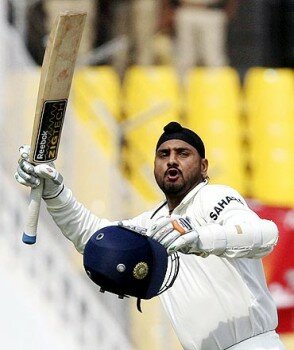 Kiwi bowlers was smashed by Harbhajan to smithereens during his 85 runs of just 82 deliveries, and his unbroken 69 runs last wicket partnership with S Sreesanth. It was the highest partnership for the 10th wicket against New Zealand. Harbhajan struck seven boundaries and five massive sixes. He was on 85 runs and completed his century early in the morning. Before spanking Daniel Vettori for a six, Harbhajan got three twos in the first three overs and gets him to 97. After that, he got couple of singles later which raise him to 99 runs.

With a single nudged to the leg-side, Harbhajan got to the century off the bowling of Southee. In the terms of the number of runs scored in the series, Harbhajan became the highest scorer in the series by overtaking Virender Sehwag. Harbhajan also became the top-scorer in a three-Test series for a number eight batsman with 295 runs at an average of 147.50.

In this series, five wickets were also taken by Harbhajan before the start of New Zealand’s second innings in Hyderabad. He scored unbeaten 111 in Hyderabad against New Zealand by following up scores of 69 and previous to it, he scored 115 in Ahmedabad. In recent times, with his consistent performances, Harbhajan is finally doing justice to his batting potential. However, the fans of Harbhajan are hoping that the ‘Turbanator’ also re-discovers his wicket-taking ways.

Dravid described Harbhajan as the “new Gary Sobers” and said that he scored almost as many runs as Virender Sehwag in the series. He also added “Harbhajan is definitely not a bunny with the bat; he was hitting it really sweetly.” Dravid also commended Sreesanth for his resolve, saying “credit to Sreesanth, he hung in there and played 50 balls. That’s his credit“.

When the reporter asked to Dravid about his dismissal after doing all the hard work earlier in the day, Dravid who scored 45 runs before being trapped by Tim Southee, said, “It’s disappointing to get after settling down, after doing all the hard work. As team we are doing pretty well, though some of us may not have gone on to make a big score, we have (almost) achieved the target (of taking a 100-run lead).” He also added, “At times you do take time to get used to the conditions. You feel good after four or five singles and get ready for the day”.