Here is provided the walkthrough guide to play latest epic turn based strategy artillery game, Gravitee Wars. In this game, you will play through 50 awards and 30 rewards unlocked upon achieving some achievements. To play the game, use mouse and arrows key. You can also use your WASD keys for pan the game screen. By using your arrow key, you can move your men to walk. 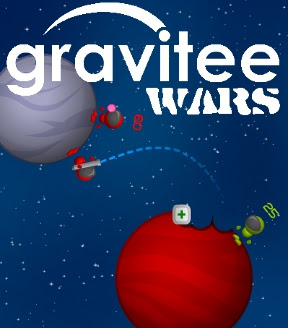 Gravitee Wars is very interesting for those people who are an avid fun of strategy games. In this game, for destroying your enemies’ slingshot your missiles by using 10 diverse weapons and utilities that you will be able to unlock as you progress in the game. During the playing time, you will earn money depending on every battle won. As you earn money, you can advance your team to improve your team member’s hit points and correctness or buy extra slots for new team members.

You can play the game as a red team and destroy the other colored units to won, take turns killing until only one team workers. The arrows show whose turn it, click and drag to aim. The blue line appears where you shot will go. Free to fire. While the play, you can also cancel your shot by putting the mouse back over the aiming unit and releasing the button. Unlock new weapons, animations and features by completing levels and winning awards. Give your best performance through the game; you will get cash reward, which you can use between levels on upgrading your units, and purchasing more teammates or weapons.

If you are the type of person who desire slight pixel accolades, then you will want to fire for the a variety of achievements the game awards not only for finishing levels in as few turns as possible, but launching an enemy into space, or taking out two baddies at once. The beginning levels of the game are easy compare to other levels. The game starts with total 50 levels. The gravity of the planets will attract your missiles. The bigger a planet is, the more gravity it will have. The closer the missile is to a planet, the more attracted to the planet it will be.

Your missiles will take lumps out of the planet as they hit them. As planets get destroyed, the gravity is reduced. The unit’s health is showed over their head. As they get hurt, this number depletes. When it reaches zero, they will explode and die, hurting other units near by. The timer shows you how much time you have gone. You get a few extra seconds after shooting to retreat.