Thomas Mueller, 20-year-old Germany striker has been awarded the ‘Golden Boot for the 2010 World Cup finals’ who complete the tourney with his five goals, three assists, and unconquerable attitude. He also triumph the Best Young Player of the World Cup 2010 award. 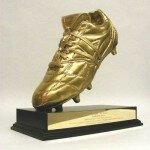 Mueller scored his first goal for Germany in their opening game of the 2010 World Cup, a 4-0 win over Australia. After that, he scored two goals against England in a fantastic display of attacking football as Germany knocked out their rivals in the second round with a 4-1 victory. Then, one against Argentina in the quarterfinal as Germany crushed the South Americans 4-0. The fifth and last goal came in the third-place game against Uruguay, as Germany beat Uruguay 3-2 to finish in third.

Mueller told FIFA.com, “Looking back, it’s been an extraordinary development path, which nobody could have foreseen — myself included“. He also added, “Normally you’d say a Champions League final would be the absolute highlight of your season, but then you go to a World Cup and take yet another step forward. It’s unbelievable. Back in May, when I left Bayern and joined up with the national squad, I had a good feeling from the off. I sensed every player was utterly determined to do well at the World Cup.” 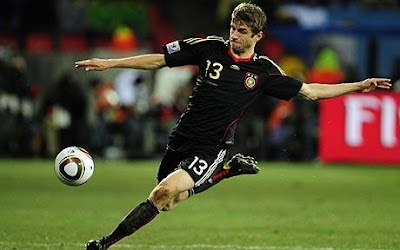 Mueller, who led Germany to a third-place finish with a 3-2 victory over Uruguay, also won the Best Young Player award. Before Thomas Mueller, Only Pelé had reached that feat before at young age of 17, when he scored six goals at the 1958 World Cup.

Mueller finished ahead of Spain’s David Villa and Wesley Sneijder, having contributed more assists, three in total, after they all finished with the same number of goals, with the Spaniard picking-up the Silver Boot, having featured in less of his side’s matches (634 mins) compared to the Dutchman (652 mins). Meanwhile, Golden Ball winner Diego Forlan finished in fourth place with five goals also, but over 654 minutes.

Mueller told FIFA’s official website, “The honor will be with me for all time. It’s a terrific confirmation of the work I’ve put in over the last year, and it’s a huge honor to be part of a group including the likes of Beckenbauer and Pele“. He added, “It also points to the excellent quality of our youth development work in Germany, so I’d like to take this opportunity to thank all the staff at Bayern Munich and the Germany national set-up, and the coaching team, who have always kept faith with me, I’ve really enjoyed my football with the lads here. [But] what I really wanted was to win the World Cup as part of a team.”

Spaniard David Villa got the Silver Boot because his combined goals and assists total was achieved in fewer playing minutes than Dutchman Wesley Sneijder, who collects the Bronze Boot. Forlan was voted the most outstanding player of the tournament and awarded the Golden Ball by accredited media after taking Uruguay to the semifinals on his back. Forlan edged Dutchman Wesley Sneijder, receiving 23.4 percent of the votes to 21.8 percent for the Dutchman. Spaniard David Villa was third with 16.9 percent.