Watch all the highlights as England take on Hungary in an International friendly match on 11th August 2010. England beat Hungary by 2-1. Steven Gerrard scored two superb goals as England came back from a goal behind to beat Hungary. 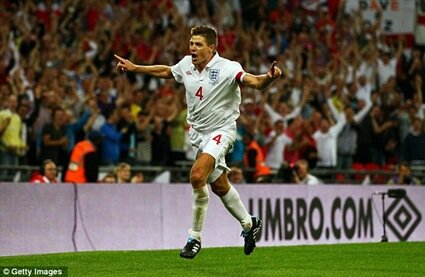 A mistake by Michael Dawson let in Zoltan Gera, who feed the ball out wide, the cross was deflected by Phil Jagielka and although Dawson appeared to have hooked the ball away, the linesman flagged for a goal. Replays showed that the ball didn’t cross the line, which was ironic given the disallowed goal which Frank Lampard scored in South Africa against Germany.

Less than 10-minutes after going behind, Steven Gerrard collected the ball 30-yards from the Hungary goal. The Liverpool midfielder put all his might behind his right footed volley, which sailed into the top corner, leaving Gabor Kiraly no chance.

Gerrard’s second wasn’t quite as spectacular, but it was equally as inspired. He was fed the ball in the Hungary penalty area and surrounded by defenders, he somehow managed to wriggle free and prod the ball past Kiraly.

After a horrific World Cup campaign this summer England will look towards trying to right a few wrongs by getting back to winning ways against Hungary this evening. In their first match at Wembley since the World Cup the England team are expected to meet a hostile reception from the fans against Hungary who were not pleased with their teams performance at the World Cup in South Africa this summer.