Diego Maradona, the current manager of the Argentine national team wants apologies. on recent controversies he commented with UEFA President, Michel Platini and his long-time nemesis, Pele’. Both Michel Platini and Pele’ had questioned again Maradona’s management credentials although apparently, Platini was misquoted.

On Luis Fabiano’s controversial hand ball against Cote d’Ivoire and some thoughts about his team, Maradona provided intriguing insights, during a press conference published by Buenos Aires newspaper, Clarin, ahead of Argentina’s last group round match against Greece.

On Tuesday 22 June 2010, Diego Maradona again has laid into the World Cup ball and suggested his team was suffering from it more than others. After his team booked a place in the last 16 with a 2-0 win over Greece he asked “The pitch and the ball are the same for both teams, but both teams do not have the same feet, so who really is affected by the way the ball bounces and runs across the grass?” 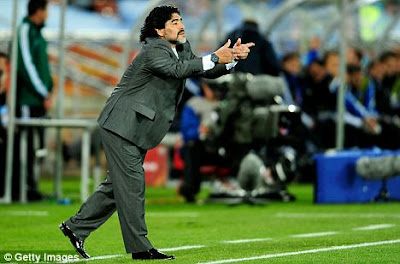 The football legend, who captained Argentina to the 1986 World Cup title, has voiced his unhappiness with the controversial Jabulani ball. It is not the first time at the tournament. Diego Maradona hit back at fellow playing greats Pele and Michel Platini, after Argentina beat Nigeria 1-0 10 days ago and saying they should go and test it themselves instead of criticising his coaching credentials.

He again directed comments at Pele and UEFA President Platini, as well as German former playing great Franz Beckenbauer, after the victory over Greece in Polokwane.

Maradona said that “All three should use their influence with football’s world governing body FIFA to get a new, better ball developed and complained the Jabulani ball had no spin, making it difficult to make a controlled, longer pass“. He also added “Instead of talking about Diego Maradona, they should talk about the ball, about a ball which helps the players,”

“I’ve tried it myself (in training). This ball doesn’t go round the corner, and you can’t get in a good cross to the far post because the ball flies straight. We are not going to see any good moves in this World Cup because no one can get the ball and control it.”

He told to the journalists, who had criticised his team before the World Cup, should now apologise after Argentina when 3-0 in the group stage.and further added “I think we’re, right now, showing what we are able to do,”

“Many of you were saying wrong things. You were wrong and really wrong. There was also sometimes a lack of respect toward the players, and I think the journalists who wrote this nonsense should apologise.”

Even you can read more news from this source http://soccernet.espn.go.com/world-cup/story/_/id/800664/ce/uk/?campaign=rss&source=soccernet&cc=4716&ver=global