After selecting for the NBA 2010 draft, Derrick Caracter becomes the first UTEP player to be chosen in NBA DRAFT in last fifteen years. West Virginia’s Devin Ebanks was also selected with 43th pick for second round of the NBA.

22 year old Caracter made his impact as NBA basketball player because of his strong forward /center play. He started his career from the University of Texas at EI Paso basketball team. During 2008 he withdrew from the NBA draft due to unknown reasons and also left the Louisville Cardinals. Then he came back in 2009 and started to play for the University of Texas as required by the NCAA regulations. 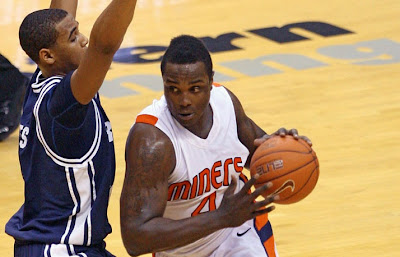 Caracter’s determination and success in the NBA appears that he was born for basketball. At a very early age, he took interest in the basketball and as a freshman he joined St. Patrick High School. To concentrate on his studies, Caracter moved to the boarding school Note Dame Preparatory School. He is 275 pound and 6.9 foot tall player and he is well-known for his good footwork, post moves and liveliness.

One of the most decorated players in the country coming out of Notre Dame Prep, Caracter played his first two seasons at Louisville and averaged better than eight points per game each year.

Caracter becomes the first Miner selected in the NBA Draft since George Banks was chosen by Miami in the second round with the 46th overall pick in 1995.

Caracter spent his first two seasons at Louisville, averaged 14.1 points and 8.1 rebounds as he earned second-team All Conference USA honors and shot a second-best 56.7% from the field during league play. Seven double-doubles have also been recorded by this emerging youngster along with 22 points that are his season high points which were made versus Houston. He is 26th player of UTEP who has been selected in the draft of NBA.

Lakers General Manager Mark Heisler said, “Caracter is very strong, has good vision … There are concerns about his conditioning and weight, which has neared 300 pounds and takes away from his mobility, and some question his attitude, too.”

Kupchak is expectant that either Ebanks, Caracter or both can make the Lakers roster for the 2010-11 season, though both will first have the chance to prove their worth at the Las Vegas Summer League in July.