The closing ceremony of 2010 Commonwealth games, one of the biggest event in Independent India is on 14th October at Jawaharlal Nehru stadium, New Delhi. A series of activities will be included in the closing ceremony of 2010 commonwealth games. Finally it is going to end, with all those tears and excitements, success and failure, and some smiling faces and someone with crying face also.

The closing is all about celebration and it will be fabulous mass song and dance event. Just like a hip hop party for all including athletes, volunteers and huge celebration time for everybody; it is going to be very youthful. From 7 PM onwards, this event will be organized at Jawahar Lal Nehru sports complex. CWG will end with a bang and fireworks after the finals of table tennis, netballs and hockey match.

It has been revealed on the official CWG sites for tickets that all sales for CWG 2010 events have closed and all events including the closing ceremony have sold out. Don’t worry; you can still watch it on TV channels like DD sports and DD National live. Internet users can also see live streaming of closing ceremony on indiatimes live channel covering all CWG games and at sportztoday.com. The theme for the nineteenth Commonwealth Closing Ceremony is chosen as Unity and solidarity. The closing ceremony will be more dynamic, and emphasize modern and contemporary India and will boast of a blend of elements from 5,000 years of Indian culture and heritage. Over 2,500 school students will go to perform with 7,000 artists from all over the nation to make the occasion memorable.

As per official sources, Sri Lankan President Mahinda Rajapaksa will attend the closing ceremony of the Commonwealth Games as an “honoured guest”. An organizer said that popular singers like Sunidhi Chauhan and Shankar Mahadevan will perform in the show. 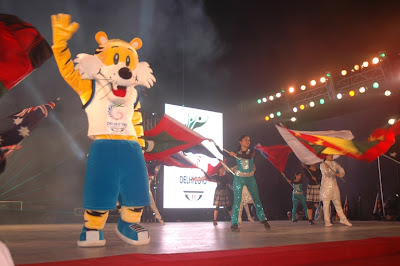 During the closing ceremony of the Commonwealth Games, India’s favourite sports song Chak De, soulful Sufi and classical tunes and traditional Bagpiper music of Scotland will bring alive the Jawaharlal Nehru Stadium today. Another highlight of the 50-minute show will be Vande Mataram, performed by 2,010 schoolchildren. The surprising and more remarkable thing is that the players of all the countries will look to move out together instead of going out country-by-country basis in order to give an impression that the whole world is a family.

Delhi police spokesman Rajan Bhagat said, ‘‘We have been on high alert all these 10 days. We will remain on top alert state till the last day of the Commonwealth Games (CWG) on Thursday,” ”Our responsibility will continue till the last foreign athlete and official leaves the country safely.”