You are here: Home / Sports & Games / Caster Semenya Allowed to Compete as a Female Runner

Caster Semenya Allowed to Compete as a Female Runner

On July 6th, the IAAF allowed Semenya to compete as a female runner as early as the Junior Word Championships which will be held in Canada this month. The results of the gender tests, however, will not be released for privacy reasons.

19 year old girl whose name is Mokgadi Caster Semenya born on 7 January, 1991. She is a South African middle-distance runner and world champion. Semenya won gold in the women’s 800 metres at the 2009 World Championships in Athletics with a time of 1:55.45 in the final.

She was denied the opportunity in March 2010 to compete in the local Yellow Pages Series V Track and Field event in Stellenbosch, South Africa because the IAAF had yet to release its findings from her gender test.

Following her victory at the 2009 World championships, questions were raised about Semenya’s gender. Semenya stated she was unconcerned about the rumours or the verification and that she considered boycotting the medal ceremony at the world championships. She was held out of international competition until July 6th, 2010 when the IAAF cleared her to return to competition. 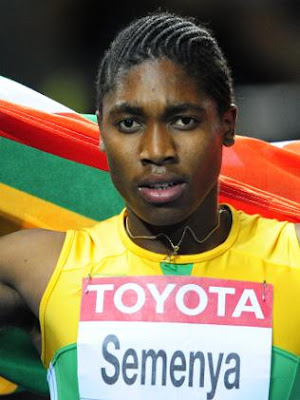 Semenya has not run competitively since winning the Athletics World Championship event, in Berlin, last year.

When called for comment yesterday, Semenya’s sister refused to speak on her behalf.

But a late afternoon press release quoted Semenya as being “thrilled” at being able to compete internationally again and being allowed to “compete with all the disputes behind me”.

A delighted minister of sport and recreation, Makhenkesi Stofile, said last night that the decision was “great news for Caster and all of us”.

“We thank each individual for their remarkable support of our golden girl. Above all, we thank Caster for her patience and resilience . Now Caster’s future is in her hands. We wish her well in her career.”

The ANC welcomed the IAAF’s decision.

”It has been our long-held view that Caster is a woman and she should have been allowed a long time ago to participate in athletics as a woman,” the party’s national spokesman, Jackson Mthembu, said.

The ANC Youth League, whose president Julius Malema lashed out at the IAAF when Semenya was banned from competing, said yesterday that the decision “brings to an end the wild speculations that were pushed and celebrated by those opposed to the progress and success of South Africa’s historically disadvantaged”.

Chuene was suspended from Athletics SA after he admitted to lying about whether Semnya had been subjected to gender tests in South Africa before travelling to the championships.

Gideon Sam, president of South Africa’s Olympic governing body, the SA Sports Confederation and Olympic Committee, said the body was happy that the issue had been resolved.