Yesterday during the U.S. Open tennis tournament in New York, the beautiful 20-year-old Danish star, Caroline Wozniacki of Denmark defeated Chelsey Gullickson of the U.S.. Beating American wild card Gullickson by 6-1, 6-1 in just 61 minutes Caroline Wozniacki eased into the second round of the U.S. Open. In the absence of Serena Williams who is not participating due to a foot injury, Wozniacki is the favorite to lift the US open. Including only one in the first set Wozniacki lived up to her No. 1 seed by making only seven unforced errors. 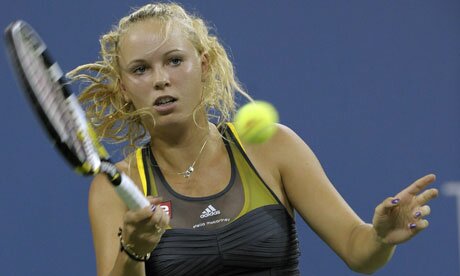 “It’s a great feeling. Actually I didn’t feel too nervous, I was just happy to be out there and get to play. We had waited for a long time. It was nice to get out there and know that the crowd was still there to support us,” Wozniacki said after her win. She was not at all broken and faced only three break points. After defeating Chelsey Gullickson, Caroline Wozniacki thanks the crowd of the U.S. She also said on court “I want to say thanks to everyone for sticking around.” she added, “I know it’s been a long night.” Since Wimbledon, Wozniacki won four titles and has compiled a 14-1 record. She also had a light workout against Gullickson, a University of Georgia All-American playing in her first grand slam.

In the second round, Last year’s beaten finalist Wozniacki will now face Kai-Chen Chang of Chinese Taipei who is ranked 84th in the world. she said, “I love being back here, especially playing the night session,” in spite of having to wait until nearly midnight to begin her first-round match after a series of long contests on Arthur Ashe center court. Among the women Wozniacki seeded first, has not yet become a big draw in New York, despite reaching last year’s final, where she lost to Kim Clijsters. But with her imposing collection of ground strokes and her happy demeanor, that day is coming for the appealing Danish star. Wozniacki said “A win is a win” aiming for her first grand slam title. “It doesn’t really matter what time I get on”. ”It’s a great feeling. I was happy to be out there. I’m happy to be through to the second round.”