Bruno Fernandes das Dores de Souza is known as Bruno who is a Brazilian football goalkeeper. On Wednesday, the goalkeeper of Brazil’s most popular soccer team surrendered to police probing the disappearance and possible murder of his ex-girlfriend, in a case that transfixed the soccer-crazed country.

He is blamed of ordering the kidnapping of 25-year-old Eliza Samudio, his former mistress and mother of his alleged child. Samudio, who is missing since early June, is believed to having been killed, but the extent of Bruno’s participation in the murder has yet to be determined.

A police source told Reuters that Bruno’s arrest was ordered after a 17-year-old cousin of the goalkeeper testified on Tuesday that he and Romao had kidnapped Samudio and driven her to Bruno’s house in Belo Horizonte. 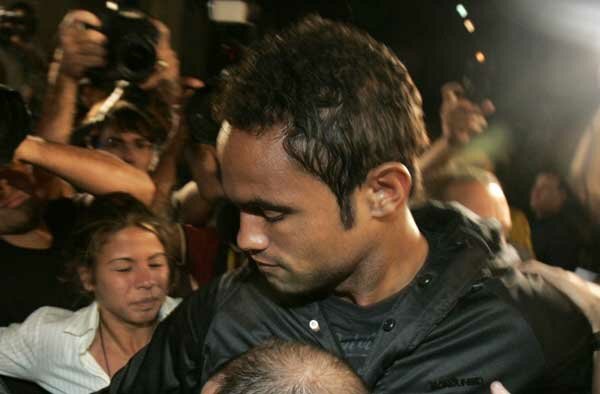 According to the teenager, Samudio was kidnapped in Rio in early June and killed some days later, in neighboring Minas Gerais state. The boy admitted to injuring Samudio but not to killing her. The police are still unsure about who actually committed the murder.

Besides Bruno, the court also issued prison warrants to Macarrao, to Bruno’s wife, Dayanne Rodrigues do Carmo Souza, and other five people. All of them have been arrested, and Macarrao turned himself up on Wednesday afternoon.

Samudio and her four-month-old baby went missing in early June. On June 23, the police received an anonymous tip that the young woman had been beaten to death in Bruno’s cottage, in Minas Gerais state. The baby was found in the next day in Minas Gerais, in a house where he had been sent to by Bruno’s wife.

Both Bruno and his wife claim they do not know what happened to Samudio. They say she abandoned the baby, leaving the child under their care. However, investigations point to murder – blood was found in the goalkeeper’s car, and analysis showed it is Samudio’s. Besides, a witness claims that Samudio has been to Bruno’s Minas Gerais house in early June, which he denies.

Samudio, 25, had filed a police complaint against Bruno last October, saying that she had been kidnapped, beaten up and forced to take medicine that would induce an abortion. She later gave birth to a baby she said was Bruno’s.

Bruno has denied involvement in Samudio’s disappearance in comments to media. Bruno’s wife was arrested in the player’s home city of Belo Horizonte, about 440 km (270 miles) north of Rio on Wednesday morning.