On 25th July 2010 5:00 PM EST, files of afghan war from 2004 to 2010 remains uncover by the website ‘Wikileaks’. It is one of the biggest leaks in military history with the records 91,000 of incidents and intelligence about the conflict were passed to Wikileaks. The other Massive leak of secret files is given below. 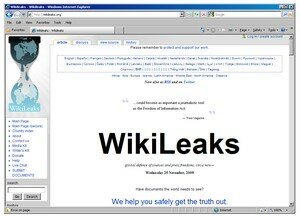 According to New York Times, “Pakistan, an ostensible ally of the United States, allows representatives of its spy service to meet directly with the Taliban”.

Britain’s Guardian newspaper said the files, many of which detail growing numbers of civilians dying at the hands of international forces as well as the Taliban, painted “a devastating portrait of the failing war in Afghanistan”.

Before the leaks were posted online, its condemnation was issued by The White House by saying the information could endanger US lives but also pointing to the administration’s long-held doubts about links between Pakistan intelligence agents and Afghan insurgents.

White House National Security Adviser James Jones said, “The United States strongly condemns the disclosure of classified information by individuals and organizations which could put the lives of Americans and our partners at risk, and threaten our national security.”

“These irresponsible leaks will not impact on our ongoing commitment to deepen our partnerships with Afghanistan and Pakistan; to defeat our common enemies; and to support the aspirations of the Afghan and Pakistani people.”

A series of remarks was also released by The White House which was made in the past by top officials expressing their concern about links between Pakistan spy services and militants in Afghanistan.

Among them was one from Defence Secretary Robert Gates dated March 31, 2009: “The ISI’s contacts with [extremist groups] are a real concern to us, and we have made these concerns known directly to the Pakistanis,” referring to Pakistan’s Inter-Services Intelligence spy agency.

Wikileaks said, “The documents were written by soldiers and intelligence officers.”

In a statement, U.S. National Security Adviser James Jones said, “the release could put the lives of Americans and our partners at risk, and threaten our national security.”
He also said, “These irresponsible leaks will not impact our ongoing commitment to deepen our partnerships with Afghanistan and Pakistan; to defeat our common enemies; and to support the aspirations of the Afghan and Pakistani people.”

Pakistan’s ambassador to the United States on Monday downplayed the documents’ release, saying many of the reports are based on conjecture and rumour.
Husain Haqqani said, “Some of these have already been proved wrong in the past, and some are just hearsay or statements by individuals. The fact of the matter is, this is routine and I don’t think as big a deal as it’s being made out to be.”

It first appeared on online in December 2006 which has been published by the Wikileaks leaked government documents. It focuses on documents that allege “government and corporate misconduct,” according to its website.

Wikileaks founder Julian Assange said while defending the documents’ release, “Militaries keep information secret to prosecute the war but also to hide abuse.”
Assange said, “There is a military argument for keeping some information secret that is very timely — as an example, where troops are about to deploy — but that information expires quickly.”

The latest documents cover the period of January 2004 to December 2009.

One revelation is that the Taliban used heat-seeking missiles to down a helicopter in 2007, possibly killing a Canadian soldier.